At the end of each week, I take time to research and plan for the coming week. I map out possible ideas to bring to body group. I research new approaches for table activities. I try to find something new to capture the minds of the children and to push them in the areas they are so fervently building on. Lately, I continuously stumble upon fun and exciting ideas for writing exercises.

As I came across these new ideas, I would find myself stuck on how exactly to fit it into our class. I wanted to find a balance between our approach to learning at Tumbleweeds and the more traditional nature of so many writing activities. I wanted whatever balance I found to emphasize the importance of reflective learning and scaffolding on children's interests. I asked myself, "How will writing lessons look in our routine?" "How will we move away from teacher led learning to a process where children participate and take ownership in learning and readiness?" "What can I provide to create conditions that support children as drivers in their education?"

These questions and more forced me to look at my teaching philosophy in a new light. Rather than stifling my desire to have writing focused lessons, they planted a seed that challenged me to figure out how it could be done. The next step was just offering it up. One day in our normal midday circle, a student noticed a wood letter from our puzzle shelf. They held it up to share with the group. Melinda continued this inquiry and went on to give the sound of the letter. This soon turned into a "I Spy" game of seeing if the letter in question was in anyone's name. The Tumbleweeders excitedly shouted out the sound and name of the letter then sounded out each of their own names to see if it might be in them.

To build on this, we began offering more concrete table provocations featuring letters. We brought in some new wooden letters that could be used for tracing. Children began to use other provocations to build letters as well- making T's and W's out of stones. It was rare to look around and not find at least one child or two focused in some sort of letter recognition activity. A small group focusing on writing seemed like the next logical step for us. Body group wasn't losing steam, but it made sense to start reducing the days spent in Body group in favor of a new small group forming.

My first goal was to take away the stigma of perfect form and legible letters. I wanted writing group to be something every child could actively participate in regardless of where they were at. To move towards this goal, my very first group focused on the feel of writing rather than the way the letter looks when you are done. To get comfortable within our new group setting, we sang a few songs. I find this helps warm up our bodies and engage our minds. It's kind of like stretching before you exercise. Our "stretch" song is often movement oriented to help get our energy running together as well. 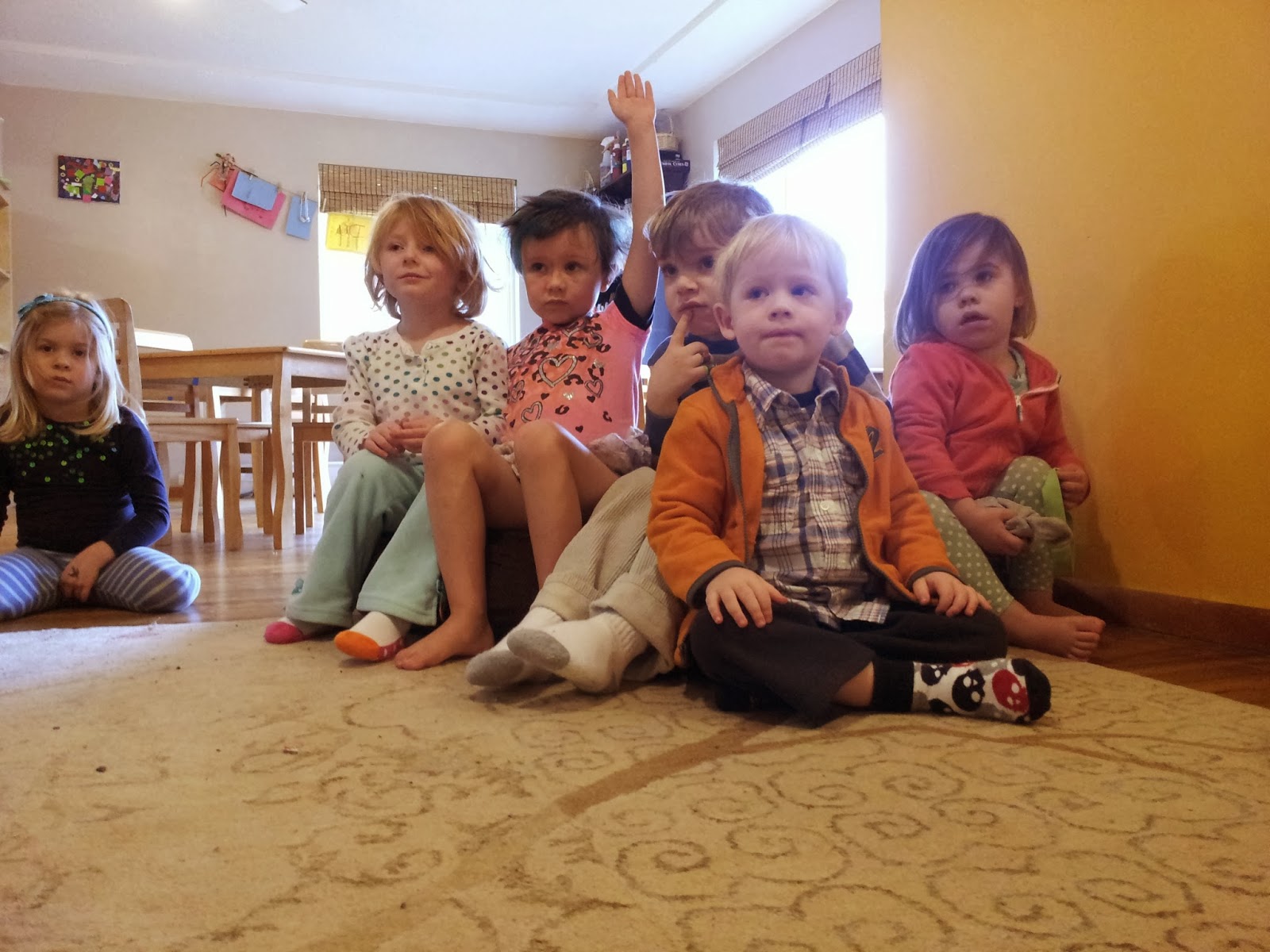 Next, I introduced some letter flash cards. We played a short game of letter recognition that focused on noticing what each letter was and the sound it made. This helps to increase familiarity with letters. After this short game, we moved on to the meat of my small group. Using a deep tray filled with salt, each child practiced writing by making the movements associated with letters. It didn't matter if each movement was perfect since the salt only gave a rough estimate of what the child was doing. It mattered more that the child got the chance to practice the movements without worrying about the end product. We started by practicing the letters in our own names. Each child was able to relate to this and had a sense of ownership as they proudly traced out the letters of their name in salt.

We then ended our group with a "cool down", to continue the exercise analogy. We sang a slowed down finger play song together to calm our bodies and feel connected after our group time together. This helps us to refocus before moving back into our normal routine with the rest of our class. We've continued to build on our small writing group since the first time we met. I mimicked the idea of writing with feel rather than for the end product with a ziplock bag of paint. We then moved on to dry erase boards which give you an end product you can erase and do over and over again. The importance of this process oriented approach to writing has clearly shined through on the determined faces of each member of small group. I look forward to continuing to move forward in this way! 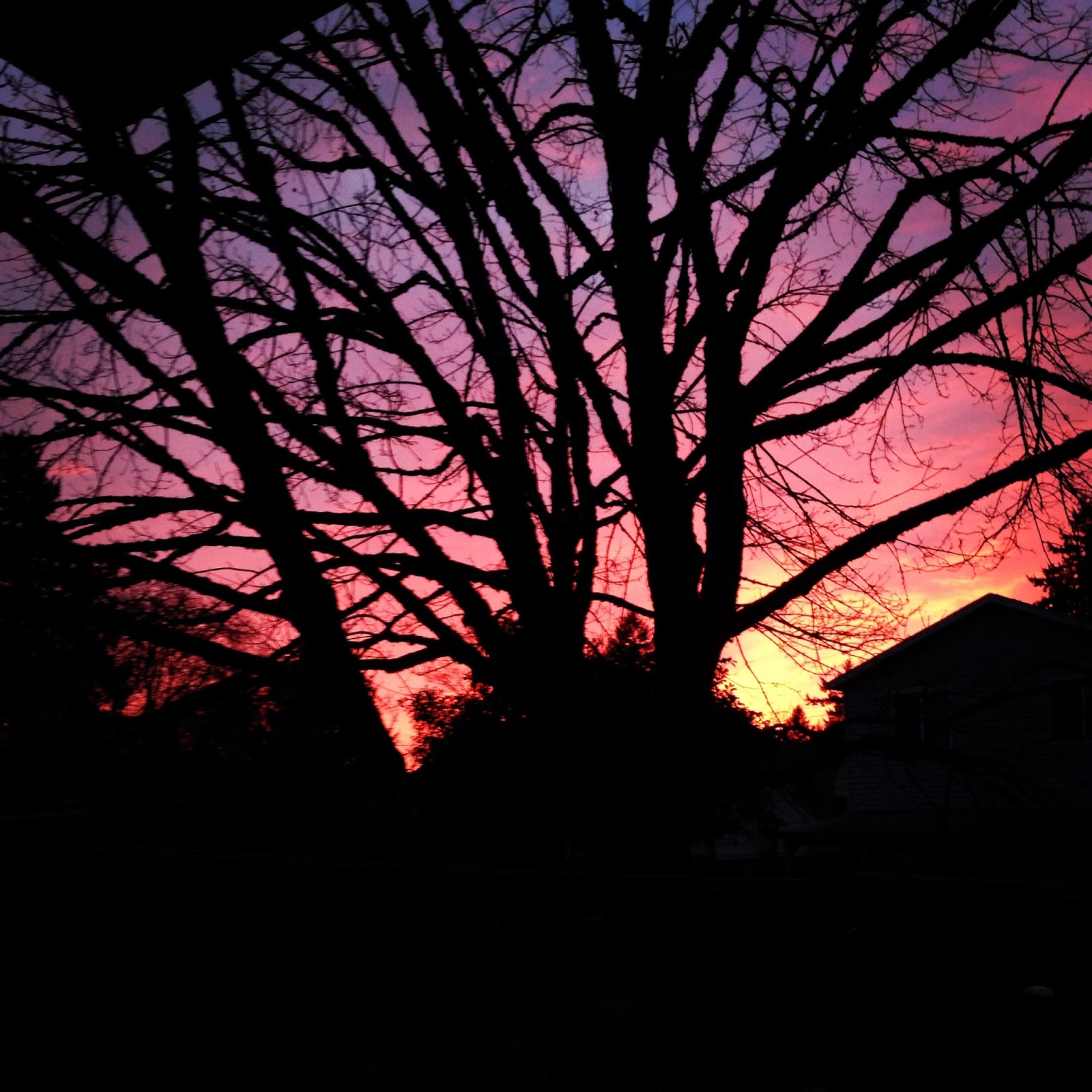 During the days before our winter break, when the dark came earlier, we found ourselves inside more that usual. At the beginning of the day which for a week in December started at around 15 degrees, I worried that our cabin fever would have gotten the better of us. We are a filling snack, spent time changing diapers and sitting on the toilet and as I set side the paperwork I looked around and everyone is not just busy, but engaged in their own way. 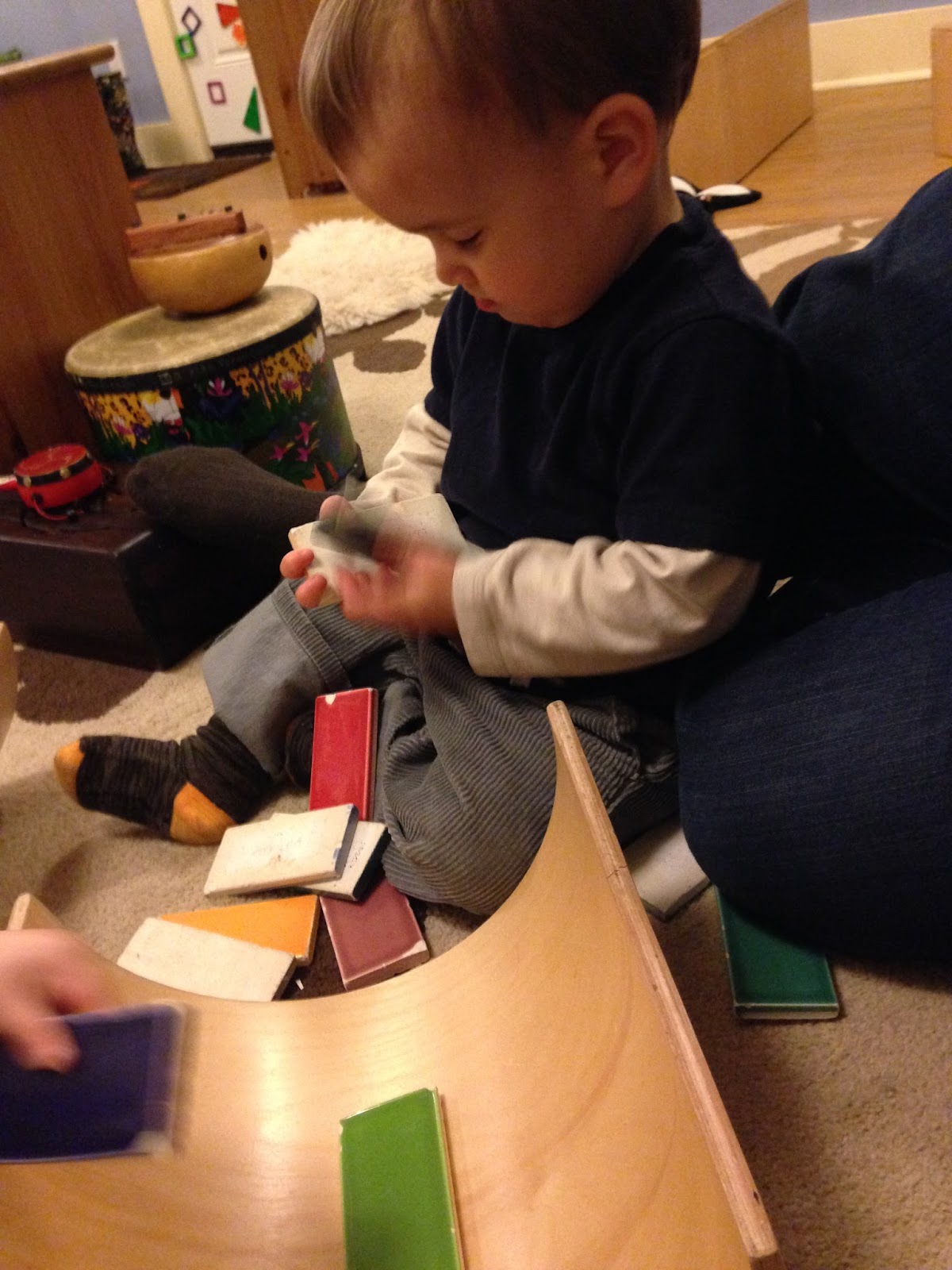 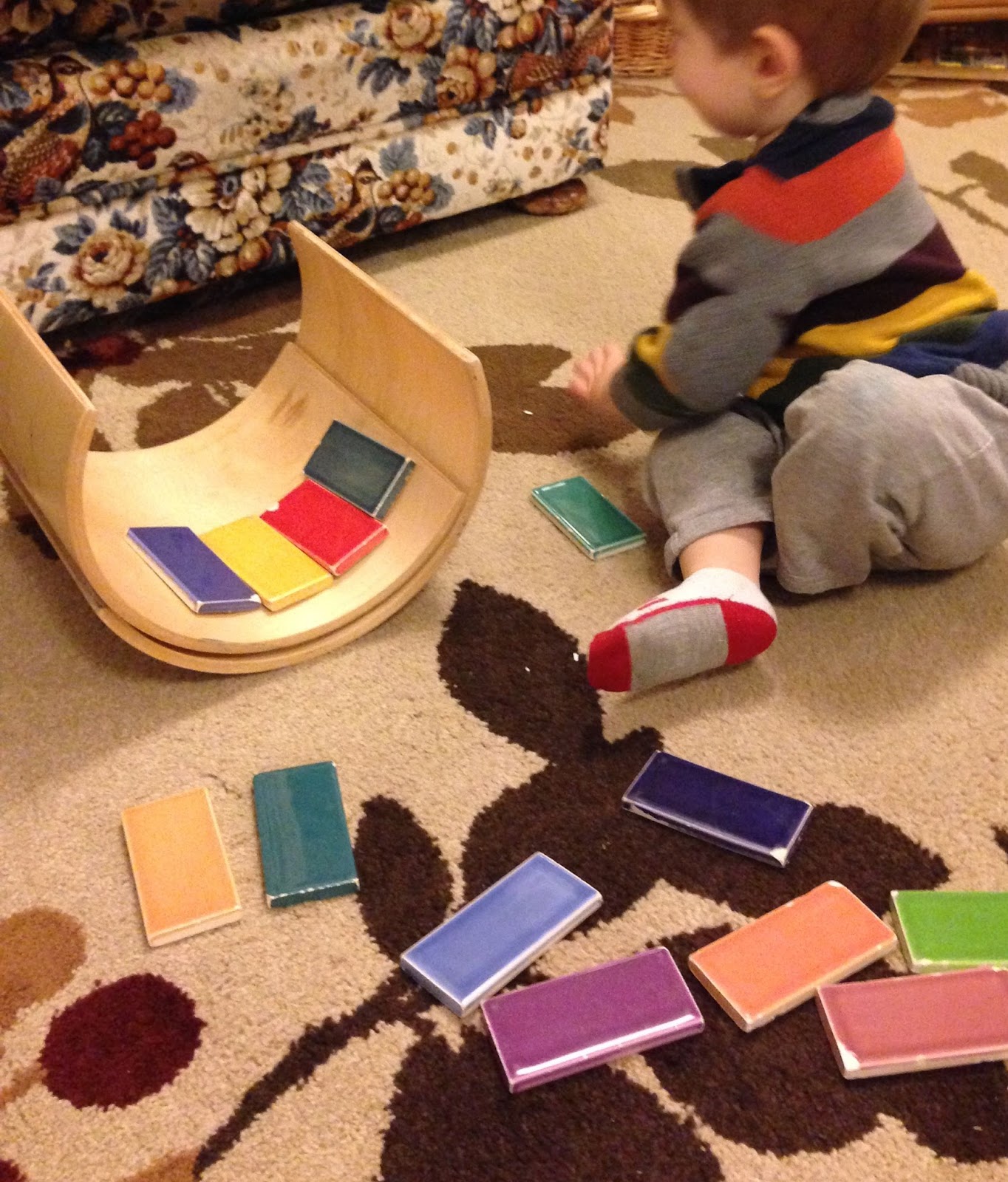 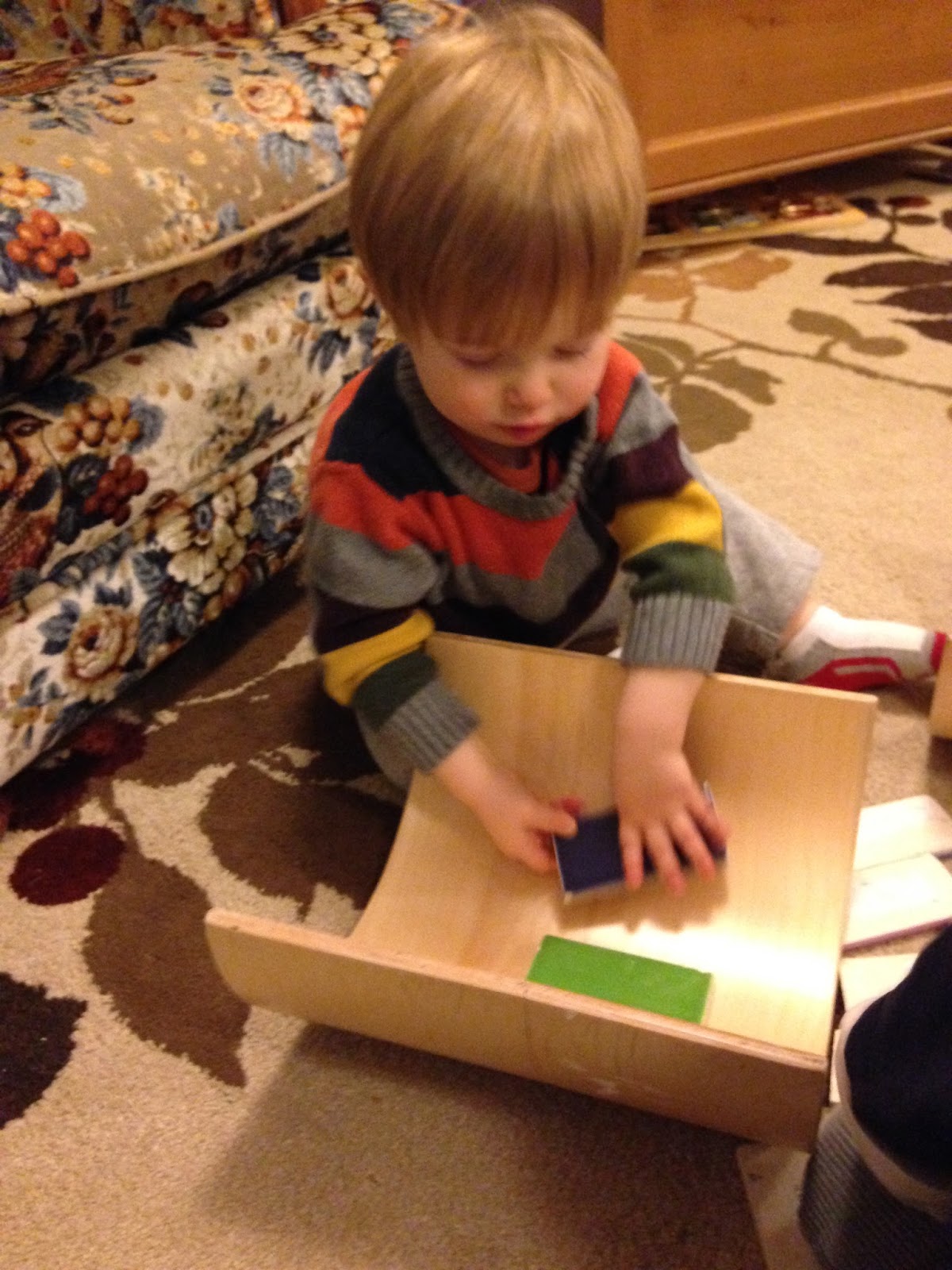 EK is carefully and gently stacking or drumming things on the drum.

Babies are being covered by carefully applied layers of silks by Z and C. "Ni-night." They say and rub the babies backs.

Wooden objects are stacked until they topple, then stacked again.


There is nothing they need from me directly to extend or enhance their play, except for the moments our eyes connect for a split second as they continue their games, our connection remaining.
I am drawn to the spaces between thing as they play. It's so plain to see that the silences and pausing is as important as the self initiated play. It's hard for an adult when we feel the magic of these moments to simply let them happen. 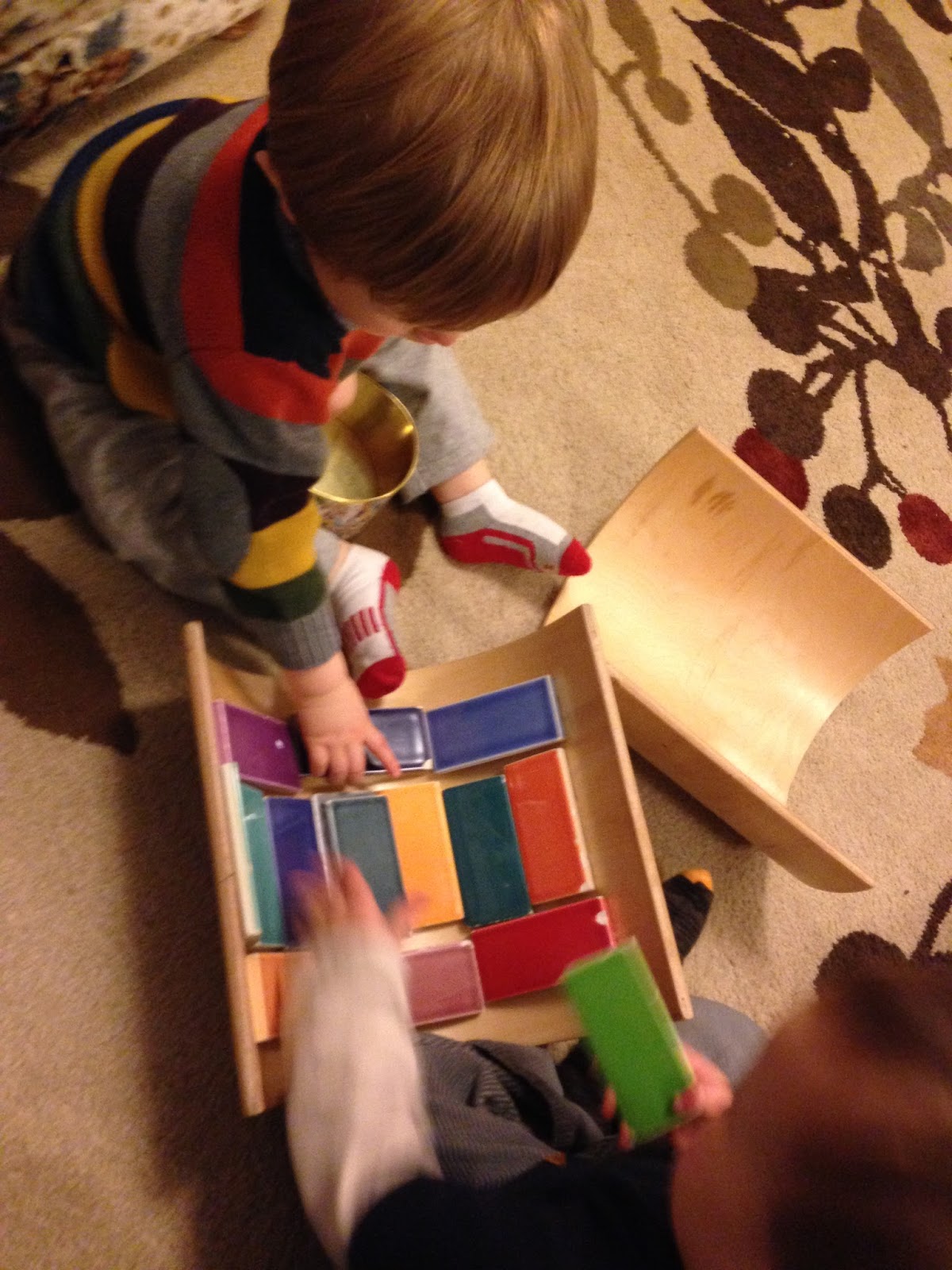 I want to be a part of what they are working on, especially the big stuff like focus and negotiations between each other. I want to prepare them for what the next step is or find a way I would think of to extend their play. But I challenge myself to simply maintain that quiet connection. To stay in the silence and find my own way to appreciate their internal focus and ability to extend and work through what they are naturally drawn to.
Posted by Briana at 8:27 PM No comments:

Lately at our preschool name calling and labeling have become a new interest. This has spread as the children are experimenting and playing in different social groups. As each child begins to play in different social groups more, especially with mixed ages, tension begins to arise. This mostly comes with the changes in communication and play levels within the group. The tumbleweed kids are mainly using name calling not to bully and tease but rather in reaction to being hurt by the challenges of social play.

As teachers we want each child to feel safe in expressing themselves as well as have a chance to experiment with different types of behavior. Seeing firsthand how actions cause reactions is a huge piece to learning how to read social cues and interact in social settings. However just reacting to name calling or hurtful words by saying "we don't use bad words" is not helpful and do not teach why it is wrong to use hurtful words. If we immediately react to a word as bad or mean then we deprive the child of learning the meaning/impact of those words and that adults find her trustworthy. A sense that "fear makes right"sometimes arises when people see bullying take place in school. When a response to a child changes from a 'that's bad' reaction to an observation it can value the child's identity as it is and allow true understanding to form. Providing logical narration as it happens is one of the most helpful ways to observe when you are the adult in this situation. Along with narration, we use a few key phrases here at Tumbleweeds that help students bridge the gap between teasing and developing their authentic self.

Do you believe them?
A and T are playing together. They've been roaming around the yard for quite a while in some sort of collaborative, imaginative play. Suddenly A steps away from T with force and says "You're stupid!"
T immediately runs to a teacher and proclaims, "A called me stupid!"
The teacher nods, "I saw that you and A were playing together. Then I noticed A called you stupid."
T nods solemnly.
The teacher says, "Do you believe them?"

This question often causes children to pause. They reassess what just happened and start to own the situation. Often, a child will respond with something like "Well I didn't like it." It gives the child a chance to understand that they are able to decide how to be affected by the words and actions of others. In reality, most of us will spend much of our lives being talked about. It's part of being a socially interactive human. One of the biggest gifts we can give children is the ability to create their own version of themselves that isn't dependent on how anyone else sees them.

What are you trying to say when you say...?
Using the same example as above with A and T, the teacher might then approach A and ask "I noticed that you and T were playing together and then you called him stupid. I wonder what you were trying to tell T when you called him stupid."
A responds, "You didn't play Dragon Hunting with me, T! I really wanted to play that and you wouldn't play it so I called you stupid."

A's answer will vary but it's likely that he called T stupid due to his own feelings of anger, frustration, or rejection. Helping A to voice what he's really feeling not only builds his ability to advocate for himself but also builds T's empathy. In the future, T might even say "I noticed when I didn't want to play Dragon Hunting you called me stupid. It must be really important to you! Maybe we can find a way to play both of our games."


What can you say instead of...?
To take it another step further, the teacher could ask A "What could you say to T instead of calling him stupid?"

By asking A to come up with a plan for talking to T next time, we can avoid forcing children to act in ways that would stifle their expression as unique and valuable people. We could easily tell A and T how they should interact with one another based on our own experiences, but giving A and T the chance to navigate these channels themselves with minimal intervention helps them to create their own authentic way of interacting.

In each of these situations, a teacher assesses how much to intervene based on where a child is. We want to see and accept each child for where they currently are rather than where they might be going; just as we want each of them to do the same for each other. By accepting each child where they are currently, we promote self-confidence to make their own choices and to learn different ways to protect their self worth and right to be authentic. Only by seeing each child come up with their own ways to solve conflict and not be told can we add to their emotional intelligence. We also simultaneously build empathy through helping each child see another child's reaction and how their actions affect others.