Throughout the month of May in the toddler classroom, I noticed many instances where one child was using an object and another child wanted that same object. Although these instances have been occurring since the children were infants, something has changed about the interactions. In most of these situations the children in each interaction worked out the struggle on their own.
Although most of the interactions have the same outcome, there are slight differences for how each child goes about trying to get an object and trying to keep an object.
The experiences I have noticed:
1. One child wants something another child has, but waits until it is available. 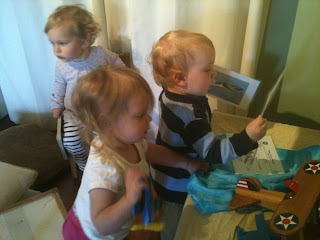 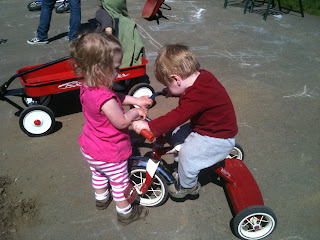 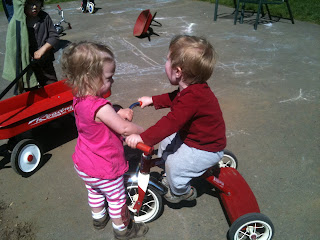 2. One child is using something and another child wants it and holds onto it. This child looks at the other child hoping he will give up the object. After the child using the object doesn't give it up, the wanting child lets go after a bit, often staying nearby, waiting for their chance to use the object. 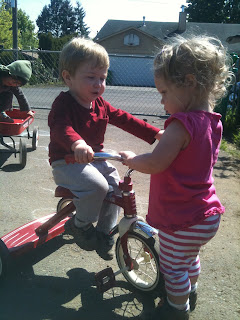 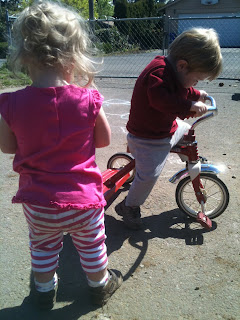 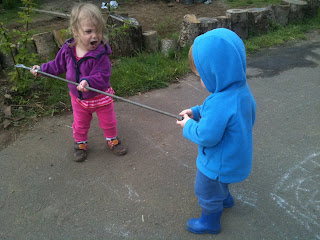 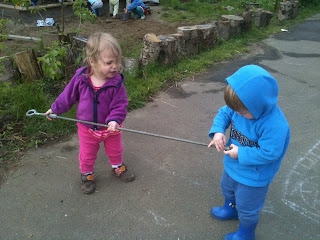 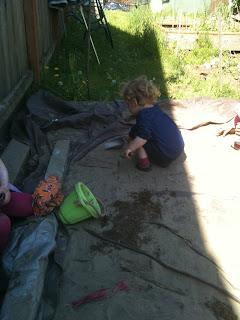 s using an object and another child comes over with a similar object. This child takes the object out of the other child's hand and then gives her the similar object as a trade. 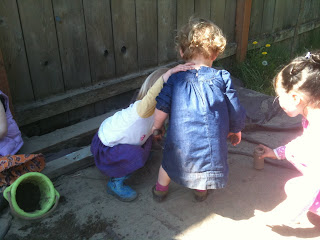 They both are content/happy with the object they have and begin using them. 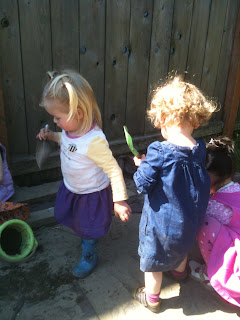 5. One child is using something and a second child comes over and holds onto it tightly. Both children hold on, letting each other know they each really want to use it. They may then look at me and I talk about what I notice, beginning with my observation. Sometimes just this helps one child let go and move onto another activity and sometimes they both still hold on. I then let the child who wants to use it know that she can ask the other child to use it (E.g., “Can I have it?”). If this doesn't change anything, I let the wanting child know that the other child is still using it. At this point in almost all situations the child lets go, sometimes sad, but quickly recovers when she finds something else to explore. 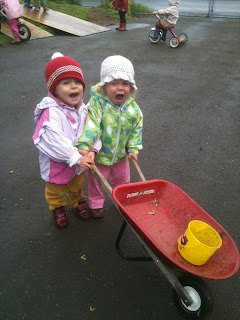 I rarely have to step in and help one child find another activity, which shows that Cohort 3:
~ Can work through their struggle together, usually with no help from me.
~ Understand that it is okay to keep the object one is using to him/herself.
~ Know that I am available if they want and that each of their feelings, frustrations, and thoughts are heard and validated. 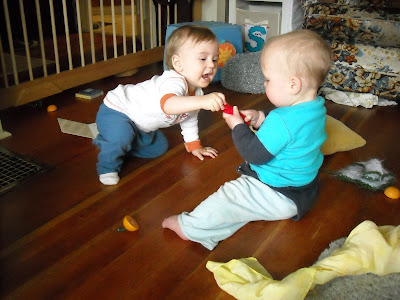 One child is holding the red cylinder. Someone notices and reaches for it. Soon both children are holding and pulling on the cylinder. 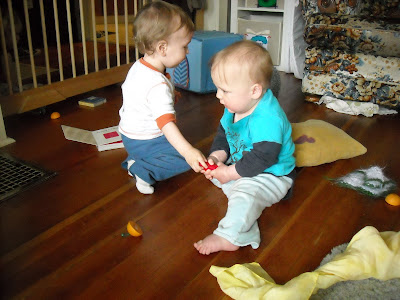 “It seems like you both love that cylinder,” I say. “If you want to keep it hold on tight!” 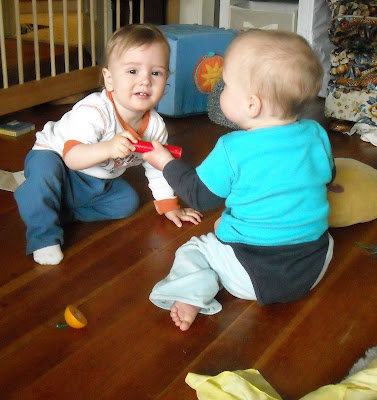 One child looks at me as I speak and I smile. “You're trying to get the cylinder, but he's holding it with both hands. He's using it!” 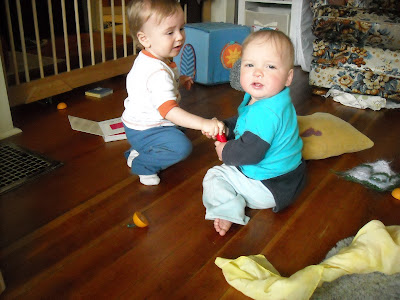 The child tries to pull the cylinder away again, but it still doesn't work. The child with the cylinder yells a little, pulling back against his grasp. “That is his way of telling you he's using it.” I say softly. 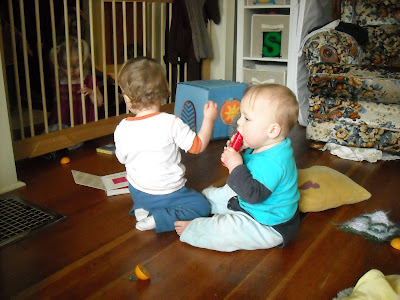 Soon the child decides to let go and discovers one of our new velcro fruit pieces. The other child continues to explore the red cylinder.

Email ThisBlogThis!Share to TwitterShare to FacebookShare to Pinterest
Labels: Briana, Cohort 4, The Work We do

How We Use Stumps 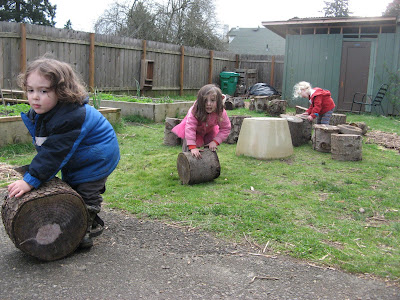 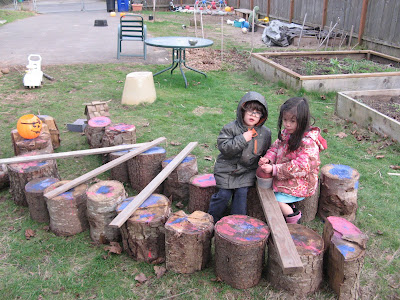 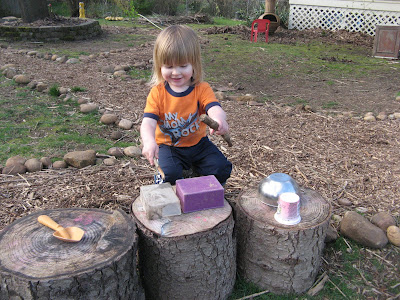 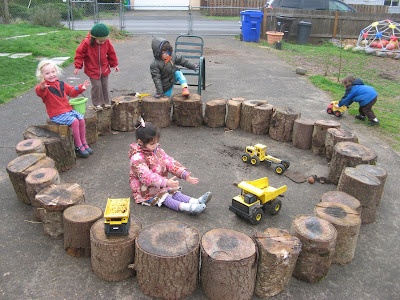 Back when I started as the preschool teacher in July last year, I was intrigued by our outdoor environment and a few stumps that the children had access to. 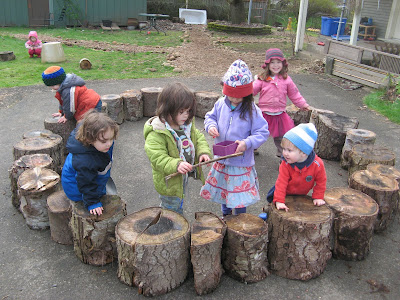 Over the course of the winter we slowly brought in more and more stumps. Luckily my parent's live in a forest and acquiring stumps from downed trees has always been easy. For the first time time I got to use a chainsaw too. 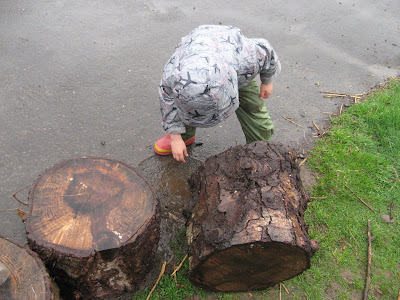 Since then, the stumps have come to be an integral part of our outdoor experience.

We look under them for millipedes, earwigs, potato bugs, night crawlers, worms, centipedes, and slugs. 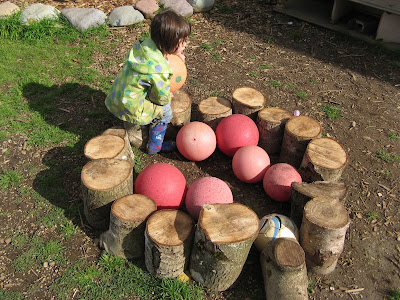 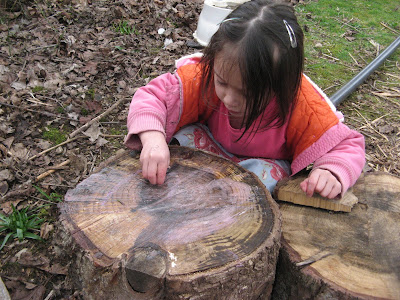 We paint them and we build boats and moons out of them.

We make music on them. We balance on them and roll them along the grass. 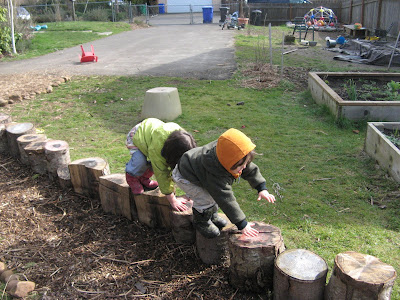 Sometimes we even have snack inside of them. 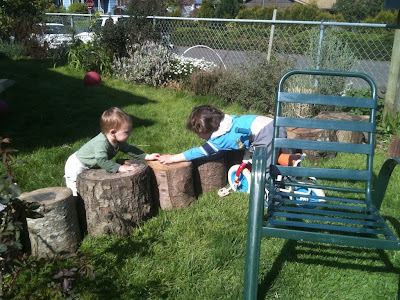 Currently the stumps serve as physical dividers between specific use areas. Who knows what they will be next.
Posted by Aron Nels Steinke at 12:56 PM 5 comments: