A Projector, a Fishing Boat, and a Neverending Journey

Anyone familiar with our school knows the importance of the "back room" -- a very open room, available for fast, big movement, and with fewer toys than other areas in our school (this room also doubles as our nap room).  Its suitability for louder, fast-paced games often means a sizable group will gather there each morning, creating complex imaginary scenarios and acting them out with energy and enthusiasm.  Lately I have been trying to dedicate at least one morning a week to observing and documenting the games that take place here and I am excited to share them with a wider audience via our blog -- they are truly a beautiful window into the ongoing processing our group is doing.  Real-life happenings, favorite movies and books, fantastic creatures and outrageous journeys (to the moon! under the sea! through tunnels and mountains on a mission!) -- you can find all of these elements in almost every game as each child contributes to the group's play. 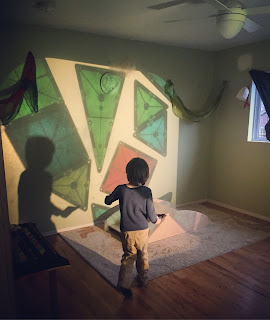 This morning, I set up the back room a little differently than usual, plugging in our old projector and arranging a few translucent magnet tiles on its surface.  The colorful shapes projected on the wall quickly drew OP's interest, who invited LD to come check it out: "Come and see something cool!" The two spend a few minutes rearranging the tiles before LD heads over to the stair toy: "This is our fishing boat!"  OP looks up with a huge grin at this suggestion and moves over to the wall, reaching for a projection of a green triangle magnet: "Try to reach the pear! I made us a pear.  These are trees!" 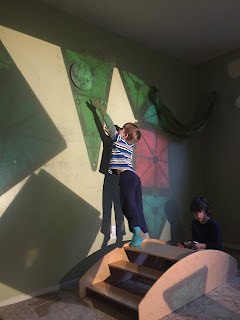 This imagination leads them both quickly to the next stage of the game: setting up a picnic!  As OP spreads the blanket out for them, LD announces: "yeah, because it's my birthday! And this is still our fishing boat, ok?"  At this point, CK and EK join the back room and we catch them up to speed on the game already in progress.  CK is instantly interested in joining the food-based, boat game with LD, while EK heads right to the projector.  EK builds an intricate magnet structure and notices that it doesn't show up on the wall -- we work together to push it higher and realize the bottom strip of the projection is actually on the floor and not the wall! 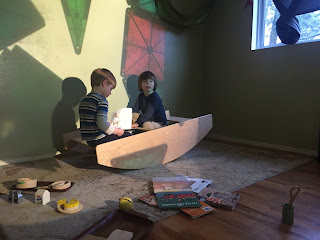 OP, LD, and CK are meanwhile in a dizzying swirl of a game that I find much trickier to track than any of them do.  Their game has evolved from just a few minutes ago: they are superheroes and dinosaurs and firefighters, changing between bad and good guys, and all the while have food to protect from tipping over in the ship.  No one declares where they are going, but they all take turns exclaiming, "it's gonna be a long, long time to get there!"  The destination itself seems not to matter -- they have packed food and prepared for a long journey as heroes or villains, and change the content of their mission at a moment's notice as they rock in the boat. 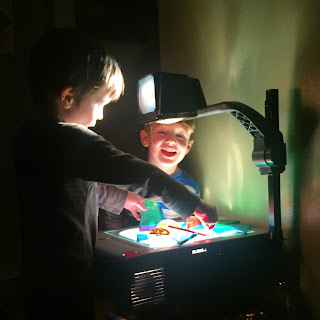 I am struck by how everyone actively listens to the others in the game, despite how quickly and dramatically each child's character and plan changes.  It is like watching a dance -- all three of them expect and look forward to their friends offering new ideas and anytime someone exclaims "hey!!", the others look to them with a smile and excitement, ready to appreciate the new direction that is almost surely about to be suggested.  In my time observing and documenting the various games that happen here, I have noticed that sometimes this dance seems to be the game itself, more so than it is about where they are going or what they will do when they get there.  The game is a space to adopt different identities, experiment with various roles, and to listen to friends who are doing the same thing. 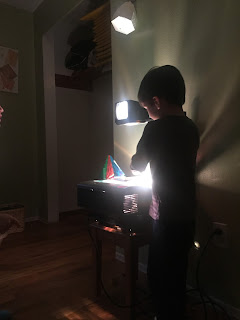 While this game continues, EK, LC, and AH have meanwhile discovered that they can project their own hands' shadows on the wall, and have turned this into a game of trying to "catch" each others shadows as one or two people head over to the wall to jump and reach for them.  EK sets his book on the projector, and a large black shadow now fills most of the wall.  Everyone pauses to check this out, and I ask: "Why do you think we can't see the colors of the book on the wall?" 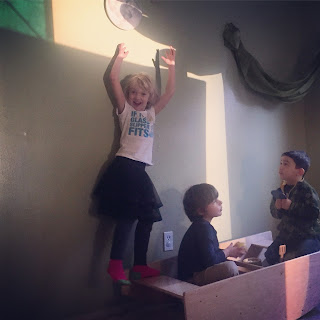 LC: "Because it's not facing down!"  She turns it over, but we are met with the same result.  The children quickly go back to projecting their own hands, preoccupied with other things. I hope we get to follow up on this question another time, perhaps with a small group!  JN arrives and is thrilled to join the game of jumping to reach the shadows.  Before long, most if not all of the children are involved in the game to catch each others hands on the wall -- this goal intersects well with the action-packed nature of the never-ending fishing boat journey, and many of the characters from that game run and leap off the boat to reach for shadows, too. 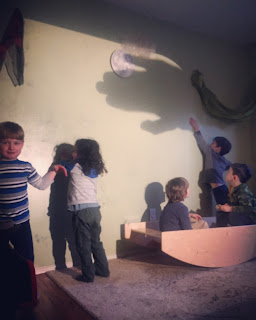 Posted by Elizabeth at 7:34 PM No comments: