We have a lot of dice in our classroom. They're everywhere! Traditional dot number dice in the wooden small parts tray, written number and letter dice for provocation activities, and story dice. These last ones are a favorite in our class, and small groups of children can often be found gathered around the little illustrated cubes. They inspire creative storytelling and are intentionally open-ended in their illustrations to allow for lots of different interpretations.

When used in small groups, these story dice can lead to amazing collaborative stories and are a useful supplement for conversations about the choices that authors make, such as story structure, plot, character development, setting, timeline, and illustration.

During one such small group, we approached the story dice pretty freely; I intentionally left out specific guidance to see where the story would organically flow. Each of us held a die in our hands and we took turns rolling, interpreting the image, and finding a way to weave these interpretations into our ever-growing story.  The first child, VM, was responsible for choosing the title, and therefore, the theme, of our story. She rolled her die and saw a picture of a crab. "King Crab's Castle" would be our title. From this title, we could decide that the main character was King Crab, and the story would be something about his life or his castle.

After ten minutes or so, we had crafted a story about a crab who lives under the sea and who finds many exciting things, including a mysterious golden egg and a magical crown.

After our story naturally wound down (spoiler: the crab dies after eating a poisonous mushroom, which makes him both angry and sick!) I revealed a secret: I had been recording the entire story-writing process on my phone! Our next job was to listen to our fresh story and transcribe it.

As we listened to our voices telling our story, each child chose an element that stood out to them - a bejeweled cup, the crown, the king's castle, or the crab itself- and illustrated it collaboratively on our large sheet of paper.

As we worked, we discovered that each of us pictured the story and its setting and characters slightly differently. For example, VM, CC, and OM all chose to incorporate the crab into their drawings, and all three of these crab drawings naturally looked quite different from one another.  But we realized that since our story lived in our minds and had previously only been told in words, it totally worked to have different interpretations. This is what makes our story collaborative! We also began noticing more details being added that were not mentioned in our original telling of the story, which filled out our illustration work and made it into quite a unique masterpiece. 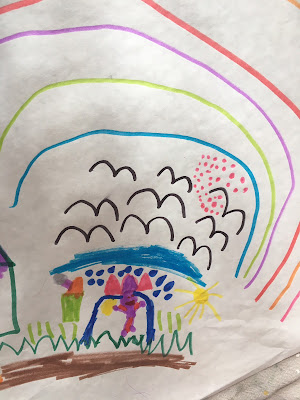 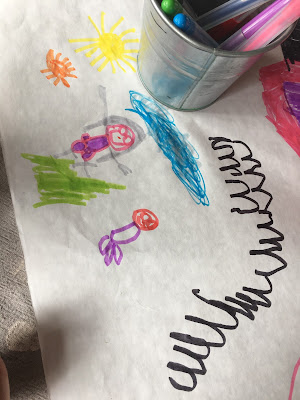 In the end, everyone's individual artistic styles and interpretations came together, and we were so proud to see our finished story after working so hard.  We had worked from start to finish - from brainstorming story topics and weaving a story with the help of our beloved story dice, to "transcribing" through illustration.  Just as a book illustrator would, we listened to and thought carefully about the story we had created and made choices about the illustration style, such as colors, setting, and characters to represent.  It felt so good to see our finished collaborative work and know that together, we had created something completely new and unique.

Posted by Gretchen at 6:06 PM No comments: