The power to give and take away..

This is the real secret of life, to be completely engaged with what you are doing in the here and now. And instead of calling it work, realize it is play. -Alan Watts

As our skies begin to clear and we can once again feel that warmth the sun brings, a bounty of excited energy has bloomed as well.  Often this energy is channeled through expanded outside play and small groups activities but sometimes it is difficult for children to handle and therefore we have experienced a lot more bumps, falls, broken plants, etc then usual. So many emotions come up when this excited energy overwelms that we as teachers need to reflect and develop new ideas to channel this behavior. 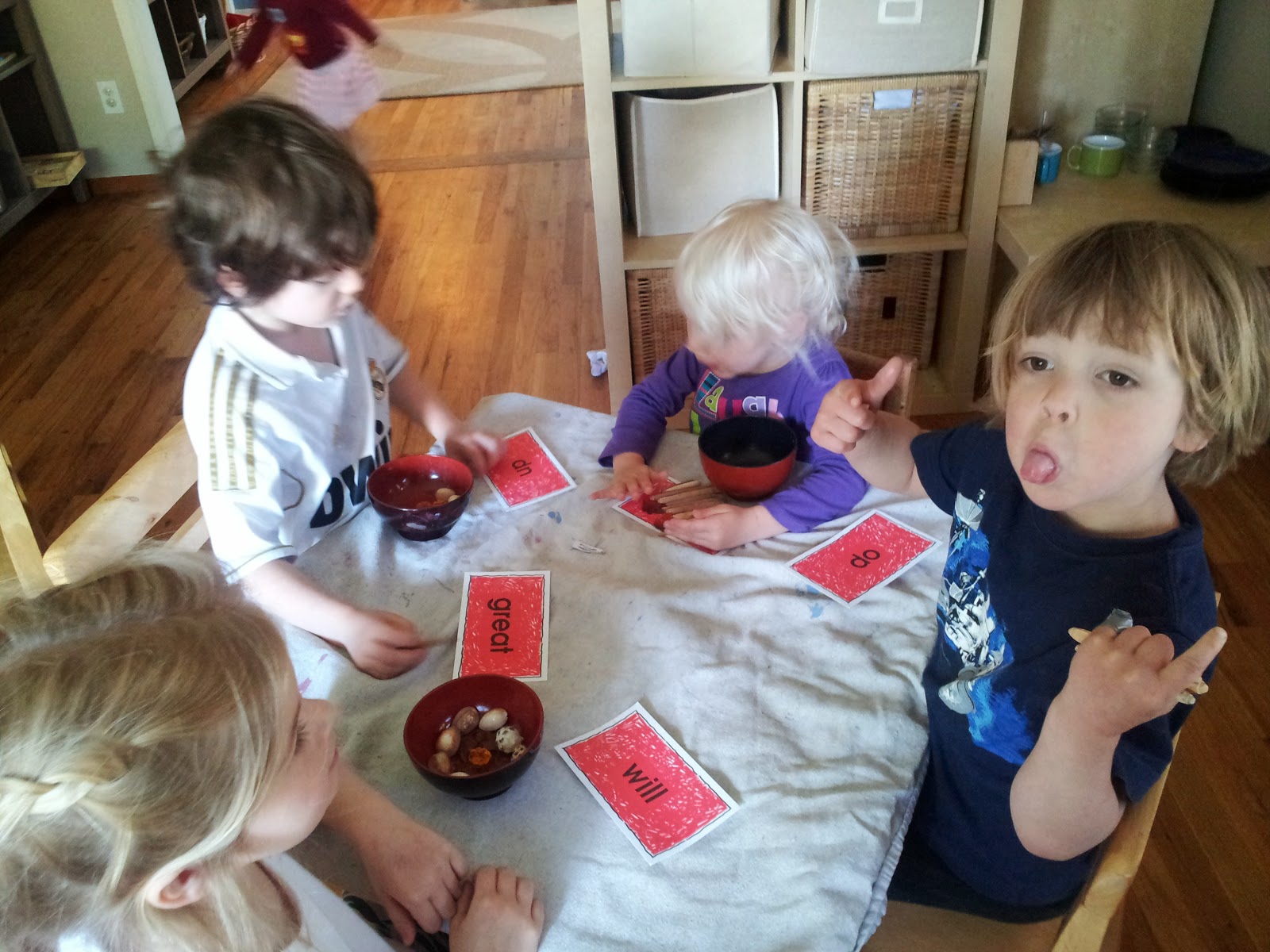 One idea that came up was why feelings are so hard to talk about. This descriptive cycle seemed perfectly synomomous with our current situation.

Lately I've noticed children go through part of this cycle but forget how to move past embarassment. We encourage every child to talk and offer solutions verbally so that they can express needs and feelings in a safe way.

When a child feels the need to destroy a block structure by throwing blocks, how can they alter this impulse and express their frustration in a cathargic way?  It is our innate human condition to need understanding and acceptance even from the very beginning. Even as a child grows and becomes more confident they are still struggling to attain these two needs on a daily basis. 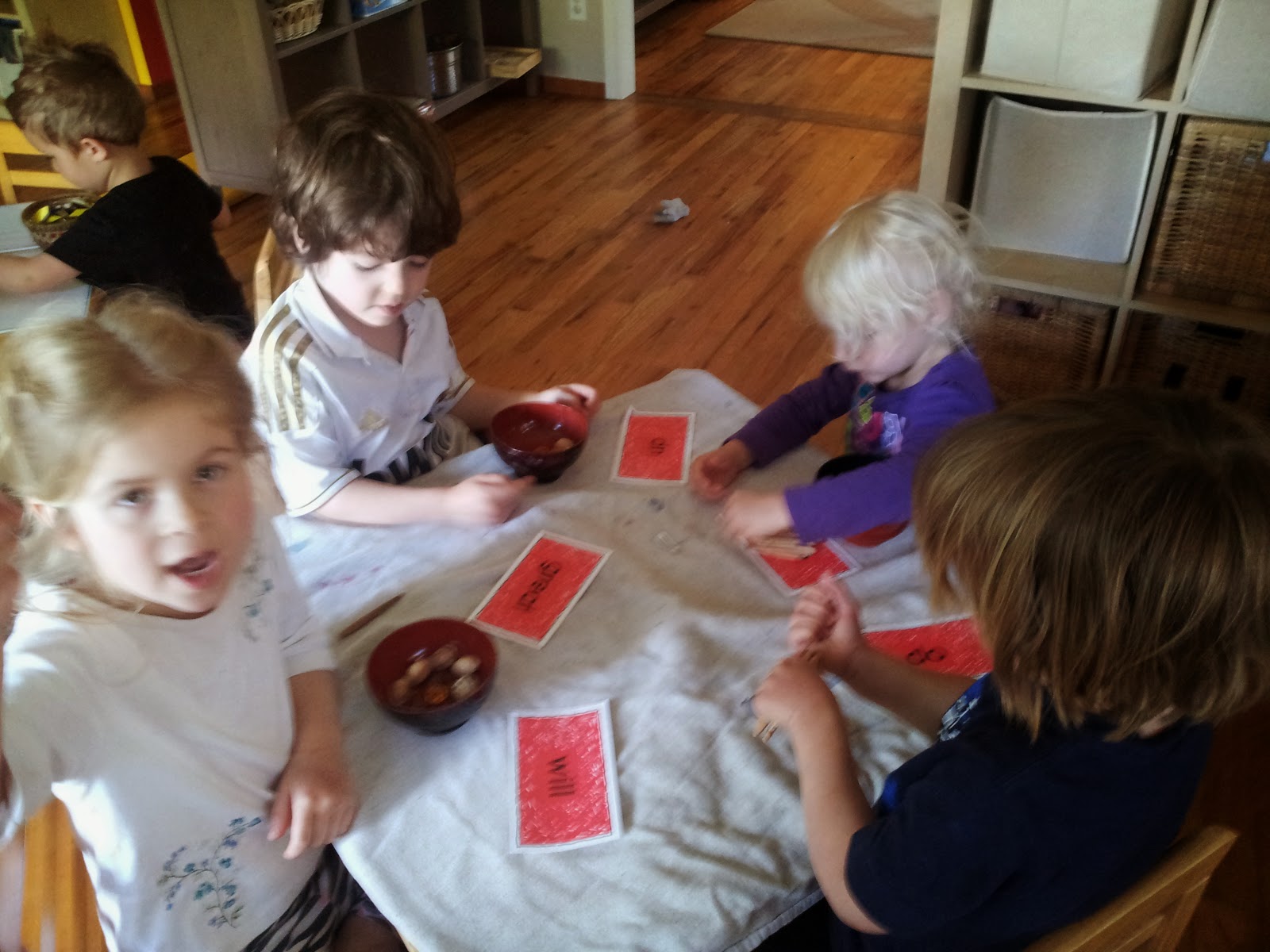 I wonder if outlets can be taught to children to use as tools when they know they are feeling unsafe in their energy.

Just as we have beautified our yard and gardens we have also refreshed our play opportunities in the yard and this has created the challenge of caring for our yard and keeping it beautiful. Just this week a couple of our children were busy picking dandy lions and eating the leaves. This quickly turned into pulling out our flowers as well as whole plants as if this game of destruction needed to escalate.


T said, "Well V was pulling them first".  V said, "I was just getting flowers".


This seems to be the first excuse for explaining why a destructive act just took place. Someone always seems to be pulling a flower or plant first. The passing of the blame also does not need to include order such as "AZ was doing it". The energy has manifested itself in no greater place then in using patience. What is patience? Many of our children dont have a clear grasp of how to be Patient.  I offered a suggestion to get the gears going.

"Could caring for the plants especially just the little vegetables be patience?" 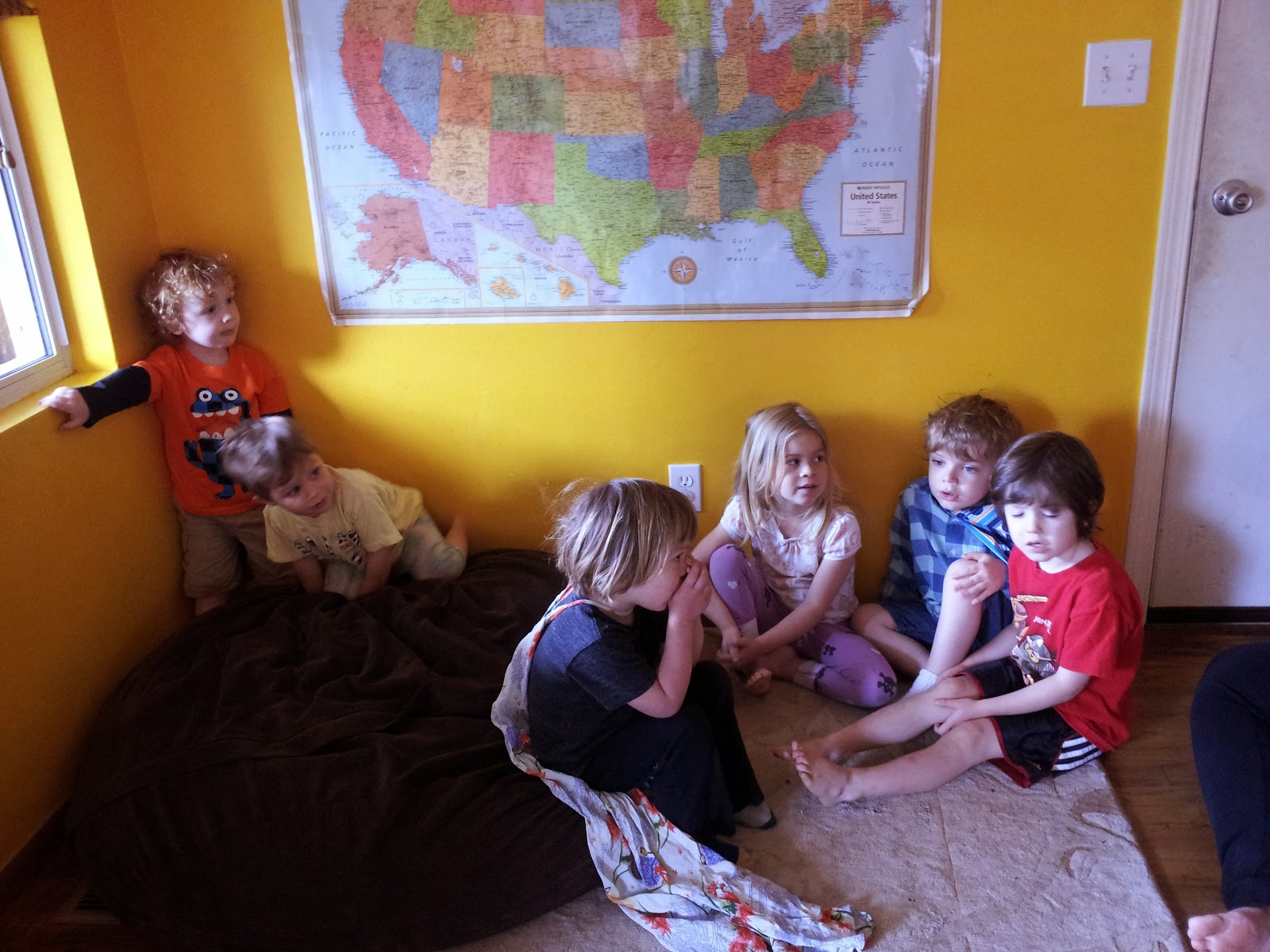 Many of the children seemed to agree and began to offer there own ideas. "Waiting for the swing" shouted M. "The stairs" followed T. When we want to go up or down the stairs from the tower sometimes there is someone on them. After some clarification we all agreed being patient is caring for people and things abound you and using words to show that.

After asking all our class how we can show patience to people and things around us we worked out that it would hurt the plants if we just pulled off leaves or vegetables whenever we wanted to. We decided it was not nice to our school or other Tumbleweeder's to take away things whenever we wanted them and if we just cared for everything around us we can give so much more joy and beauty to not only ourselves but others. 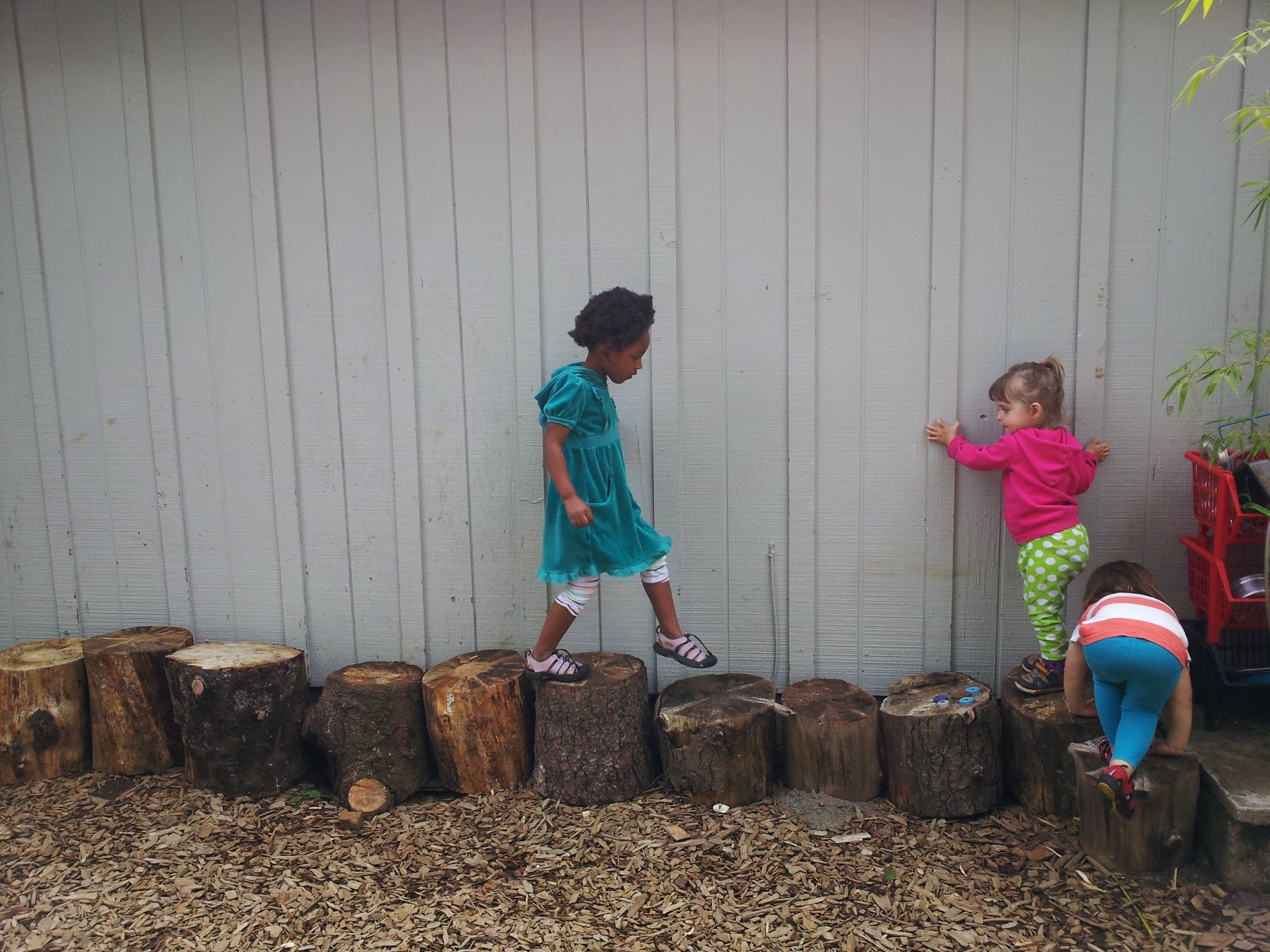 Email ThisBlogThis!Share to TwitterShare to FacebookShare to Pinterest
Labels: Communication, Environment, Outside, Social Interactions, The Work We do, TPH


In Color Group today we experimented with color. I set out the materials for our experiments and invited QM, TB, and LC to join me at the table. I sat quietly for a moment as they explored the materials and talked among themselves. They were keen to discuss which colors they liked best and theorize on what the empty jars might be for. 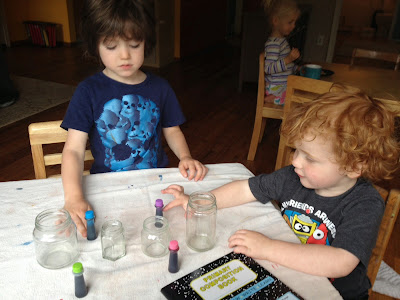 TB pointed to blue and then green, "These are my favorite colors, Q."
QM pointed to purple, "This mine!"
As LC joined us she announced, "My favorite is pink! I'm having Pink!"
"What are the jars for?" TB asked me. I looked at him quietly and he suggested, "For the colors??"
LC nodded, "Yeah! For colors! For making colors! I'm putting pink in one!"
TB looked back and forth between QM and LC, "We could share all the colors."
QM nodded in agreement, "Yeah!!!"
LC shook her head, "No! Then I won't have any!"
TB said, "I'm going to use green then."
"I want pink!" LC announced.
"This one mine!" QM said. 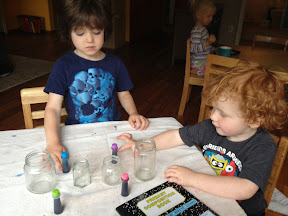 I chose this moment to speak up, "It sounds like you've each picked out a color you want to use. That definitely works. We are going to do some color experiments and we need one color to be a base color so we can compare the colors we make to it at the end. Since blue hasn't been picked, that can be our base color."

I carefully put a few drops of blue into the first empty jar then added water to make it a rich hue that we could see light through. It was important to be able to see through the color so that we can more easily compare it to the colors we created. Everyone watched very intently, silently taking in what I was doing. I slowly took my very full jar and added our base color to each of the jars in equal amounts speaking as I did this, "I'm going to add the same amount of blue to each jar. We want to be able to tell what happens when we add our color so we try to keep everything the same as possible in each jar. The same amount of water, the same amount of food coloring." Once I was finished everyone was eager to add their colors!

"Before we add your colors we need to talk about what we think will happen! Let's look at LC's jar first. It has blue in it now and LC will add pink to it. This jar will be Jar B. What do you think will happen to Jar B?" I recorded our thoughts in our experiment journal. TB said "It's going to turn it red!"


"Okay, and what about your jar, TB? It's blue now and you are adding green. Let's call yours Jar C. What will Jar C do?" LC spoke up this time, "Red or green or pink!!!" I recorded her ideas.

"And last is Jar D which is QM's jar. It's blue now and we are going to add purple. What might happen?" All three of them had a different idea this time! QM said it would be yellow. LC said it would turn red. TB said it would be pink! Now that we had recorded all of our assumptions, we could begin our experiment. 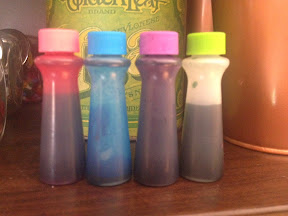 We started with Jar B. LC carefully added a few drops of pink. The pink added to the blue made the color dark again so we added tiny amounts of water until we could see through it. Then we placed it next to our base jar (Jar A). All three of them studied it for a second discussing what color they thought it might be. We repeated with Jar C and and Jar D before recording what happened.