Mindfulness and Yoga: Moving, Relaxing, and Centering Ourselves

It all started with a nap mat and a little imagination.


Nap time can be a tricky time for preschool. There's so many transitions; from the lunch table, to the bathroom to setting up our mats it's no wonder there is some extra built up energy that needs to be released. Instead of letting the energy get the best of us, I decided to utilize the energy into a practice that can be used throughout the day; mindfulness.
To quote a great site that has some useful mindfulness steps for children,

"The purpose of teaching mindfulness to our children is to give them skills to develop their awareness of their inner and outer experiences, to recognize their thoughts as 'just thoughts,' to understand how emotions manifest in their bodies, to recognize when their attention has wandered, and to provide tools for impulse control."

Now to bring us back to nap time, our mats, and our imagination.

I asked them to close their eyes and imagine their mats were boats about to set sail for the open ocean to go on a fishing trip. They were hooked. Using common yoga poses, we were able to be engaged and centered as we caught starfish, whales, and fishes.

At the end of our yoga adventure, I asked the children to place their hands over their hearts and listen. Some decided to participate and some did not, opting for a book instead. The ones who did place their hands on their hearts became still, quiet, and mindful of their heart beat, slowing down their breath and taking note of how it was slowing down. Even though it only lasted for a few seconds, it was truly a magical thing to witness them centering their thoughts and bodies.  That's when I decided to not only make this a nap time routine, but to find a way to implement it throughout the school day.

Some of the best times we were able to use our new strategies were during group time. We would take deep breaths and see if we could be as quiet as possible. Then we'd ask if they could hear the running water from the sink or the cars passing outside, encouraging them to listen even closer. 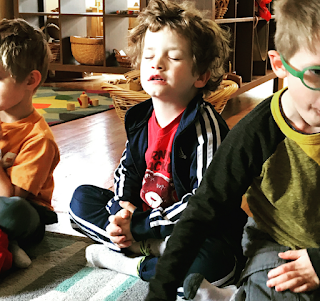 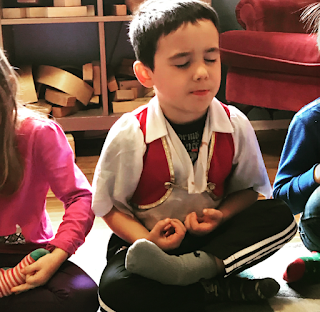 We've also been keen in some heavy pushing and stretching right before nap time to help us get some of the energy out through the bottoms of our feet and hands as we pushed with all our might against the hard surface of the wall.


I found the more I actively practiced breathing and keeping calm, more times than not the children would perk up and want to participate with me. Sometimes it worked and sometimes it didn't. The best part of it all is that it's being practiced consistently. Soon enough it will become a habit, and what a great habit to start having in our wonderful school.
Posted by Alexandria at 4:00 PM No comments: