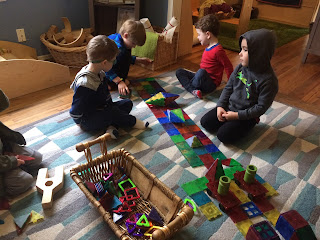 Magnet tiles have always been one of the preschoolers favorite activities to start the day, during transition periods and other parts during the day.  Over the years almost anything you can imagine has been created: zoos, houses, trains, the longest line of tiles ever, vehicles.  The most favorite thing to build lately has been space ships of one sort or another.  During this time, I often place myself nearby, mimicking and talking about what I notice.
"Oh wow.  Look how those are connected!  Can you tell me more?"
"That one has a blaster?  I wonder why?"
"I don't think I've seen a design like that before.  It looks like you decided to use all isosceles triangles this time."
My goal is to highlight the work that is happening ( "I see...." or "I notice....") and then extend what the next step or help encourage the wonder ( "I wonder..." or "What's next..." or "What's the story....").  This also helps me to connect with them and build our relationship, as I spend time and share my presence in the morning. 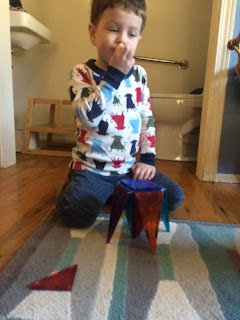 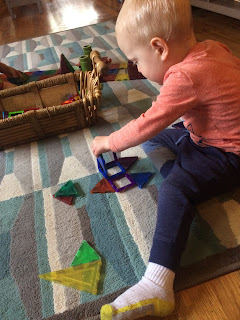 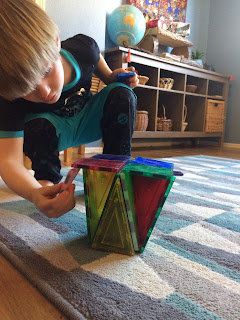 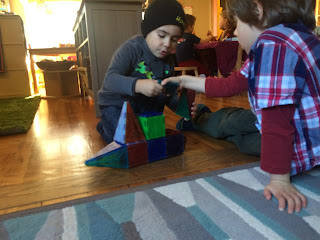 Most recently, something new has been happening with the magnet tiles.  At first I didn't notice it happening until one day when one child began to teach another child how to build "a transformer spaceship blasting off."  I feel like I am often quite present during my time when I am with the children, but some how this theme of transformation had slipped under my focus.  The more I looked for it, the more I saw the children adding the idea of using the magnet's natural force of attraction into their spaceship play, creating vehicles which transform as they move or land. 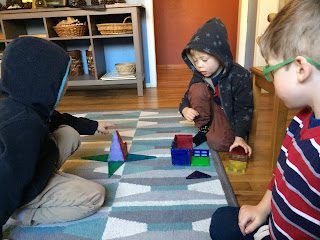 It began by one child building one shape over and over.  He laid the pieces out very carefully, then lifted the shape and the flattened pieces fell and attracted together, because of the magnets, causing the shape to change.  "It blasted off and then transformed!" he cheered.  This concept was very attractive to the other children nearby, and soon others were asking how it worked.  It turned out it took a deft hand to make the transformation happen smoothly, and there were many crashes before a smooth take off was achieved by everyone.  This refinement of movement and working through a logical series of events was attractive to everyone involved as it speaks to a preschooler's need for order and attraction to the scientific process.  But it seemed even more than that to me, as a sense of community was forming around the idea of transforming and the new way these familiar blocks were being used.  A new language was being developed and allowed for the children to speak to each other, to share stories with each other  and delve deeper into this material in a new and exciting way.