It's always exciting when new materials are introduced to our play areas. There's something fresh and exciting for both the children and the teachers when it comes to having something new. Personally, I'm always anxious to see how they will use it and envelop it into their current play schemas. How will it fit into the recent surge of interest in pirates, for example? I'm also anxious to see who will gravitate towards it most. I have my guesses based on the time I spend with the children. 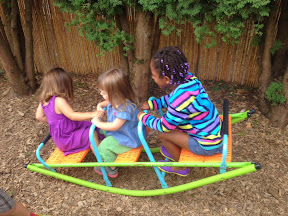 For example, my own daughter is rather impressed by mythical creatures. Dragons, chimeras, and kraakens often take her fancy. My son, however, loves transportation of any sort and longs to adventure on the rides at any given theme park. When we bring something new into our home I'm always interested to see how it will play out between the two of them. A puzzle of a car may have the interest of my son for a moment, but it's my daughter who will sit at the table painstakingly attempting to put together a puzzle that's just beyond her spatial comprehension as of yet. It may not feature her favorite mythical creatures- but it's a mystery she wants to solve. As I watched her last night, failing again and again to find a match for a particular piece, I was reminded of one of our newest additions to our classroom outside: the teeter totter. 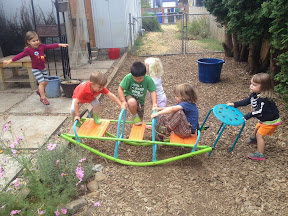 The teeter totter has a lot to offer. It's something very different from our other materials outside. It provides gross motor play like the bridge, the climbing structure, or sandbox- but it also inherently requires some teamwork and negotiating. To use a teeter totter you typically need two interested parties. One to sit on each side. Each party rocks the teeter totter back and forth. It can get a little crazy- which is kind of the point. When everything is in sync you get that unmistakable feeling that I can only describe as "being a kid". It feels like flying and somehow you are simultaneously completely in control and not in control at all. I'm sure you all know what I'm speaking of, but if you don't get to a park straightaway! Find the nearest swing set, sit down, and pump until you are flying. Even as an adult it is still one of the best feelings in the world to me.

The teeter totter quickly attracted everyone's attention. At first, everyone wanted to use it simply because it was new. There's an excitement that comes with being new that no one can really argue against. There were lines to use the teeter totter and a LOT of teacher guidance during play to help everyone negotiate and get used to how this new thing worked. After a while, though, the lines diminished and it became simply another fixture of our outside play. This is when I started observing it. Now that it was a trusted part of our yard, how would the children use it? 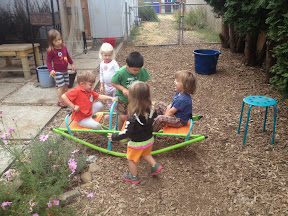 Quickly it ceased to be a teeter totter. It was a ship at sea and the captain had fallen overboard! It was a rocket ship in outer space waiting to come home! It was a house for two mommies and one very demanding daughter! It was a hiding spot for bad guys who had taken ALL the flowers from the vase! The great thing about play is the limitless options for what something can be. The teeter totter had not only a purpose but a story behind that purpose. Of course, it was also the sight of many, many negotiations.

As I said earlier, a teeter totter typically requires two interested parties. However, most of the play that takes up our time outside has more than two interested parties. Often there is a few groups of two to three children playing at once and occasionally you may see a larger group of five or more. The teeter totter in our classroom particularly called to groups of three. There is a small seat in the middle to help the stability of the teeter totter which, to many of those involved in play outside, looks to be the best possible spot for a third person to sit. Though I observed many such negotiations, I would love to share one in particular. 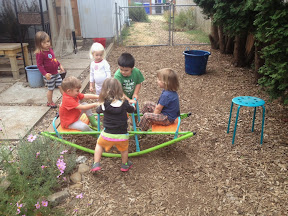 TUS, JK, SC, AS, LC, and EF are gathered around the teeter totter.
TUS: This is a rocket ship!
JK: Yeah and I'm just an astronaut guy!
SC: Me too, guys!
TUS: No! You can't sit there! It's just two people.

SC: I want to!
EF approaches and watches TUS, JK, and SC closely. She puts her hands on the teeter totter.
TUS: No! Don't touch it.
EF watches him closely but doesn't move her hands.
TUS: Okay, you can touch it! But no one can sit here.
TUS and JK begin to rock back and forth. EF and SC use their hands to help move the teeter totter. 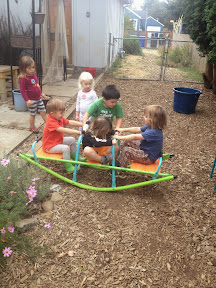 SC: It's fast!
EF stops moving it and starts to climb on. TUS watches her but doesn't say anything.
TUS: Okay, I guess you can sit there. We have to move it on our own, though.

After about ten more seconds of rocking everyone but EF leaves for a different rocket ship. 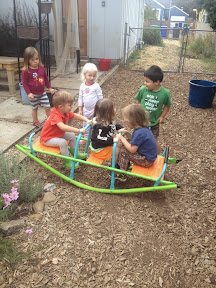 It was interesting to observe this particular negotiation for a few different reasons. First, no one got angry or hurt. Everyone felt heard as they continued to figure out what worked for them. No one seemed certain they had the right answer, they were all just working together. They kept voicing their own individual needs and concerns and eventually they got to a place where they all agreed. No one presented their opinion as their opinion necessarily- but they all seemed to be speaking the same language. Each child wanted to find a way that worked for everyone. Yes, there were heightened emotions and children felt strongly- but they felt comfortable with feeling strongly! 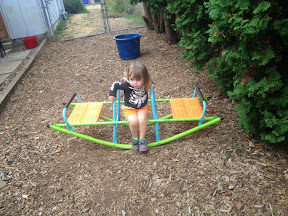 Second, it wasn't about the teeter totter. At the end only really EF was interested in teetering or tottering. For the rest of them, it was about the negotiation itself. It was engaging because there was a challenge at hand for them all to work on together! As a group, they needed to solve the challenge of how the teeter totter was meant to be used for their game. Once that had passed, the interest waned and they moved on.

Third, six different children- some of whom wanted to be on the teeter totter and others who simply wanted to observe- worked together. There were both participants and observers when it came to the actual teeter totter, but all six were invested and engaged in the challenge at hand- which is the real focus of play here. Everyone had an input- either verbal or nonverbal- and everyone had their moment to give something as a solution progressed.

The teeter totter is sure to be the home of many more interesting observations in the coming weeks. Negotiations have been huge lately! I'm excited to see where the children take it next, but for now I'll leave you with this: Teeter totters typically need two interested parties, sometimes more. However, one very interested party is just as useful as you can see: