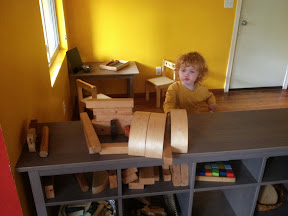 QM sets out the colored squares carefully. He points to them, collectively, and announces, "This is paint." CE finds a large wooden block and loads a colored square on it. She dabs at it with a citiblock and nods to QM, "I like to use this color." AS reaches in to grab some paint, too, and reaches for a square already in QM's hand while saying, "I want this color." 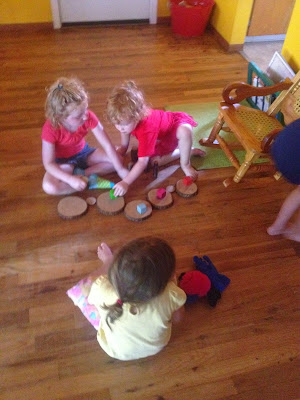 They both stare at each other for a moment. CE, sensing the tension, offers up a suggestion, "There's lots of these! We can use them together." AS, crying now, shakes her head to indicate this plan doesn't work for her. She needs this certain block. She had a plan for it and it was to be hers. QM echoes this feeling as he continues to scream that he, in fact, needs the block. They both feel passionately about this block.

It may seem insignificant to an observer- it's just a block after all!  Even after ten years of watching these scenarios play out I have to squash my instinct to simply remove the block from play or introduce new materials. I'm a peacemaker at heart and I want everyone to just be happy. It's easy to forget that by helping them be happy I'm actually negating their emotions and telling them it's not okay to want something so bad that you won't give it up- for anything. After I've taken a moment to remove myself and my own needs from their conflict, I move closer. It's not time for me to interrupt, yet, but I want them to know that I'm here. I'm available. I want to send the message that I see them and I hear them, but also that I trust them. 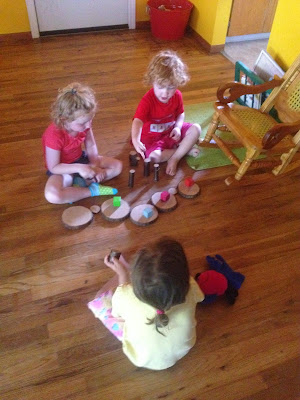 The block lies on the floor in between them now. They are both still adamant about being the one to use it. They slowly return to playing, but anytime one reaches for the block the other profusely protests. CE begins an elaborate story with the blocks in her hands, "These blocks are friends! They play together!" AS and QM ignore her for the most part- preferring to focus their energy on the single block still.

I start to wonder if the block will shadow their play for the rest of the day. We are inching closer to closing time, after all- maybe there won't be a resolution. I process for this ending in my head. I feel uneasy at first- there has to be a solution, right? Then I realize that I'm buying into seeing the block as insignificant again. For me, it's a block. It's something I could easily let go. I try to put it into terms of arguments I have trouble letting go. For instance, I become livid when someone mistakes a Led Zeppelin song for pretty much any other band in the world. I also cannot fathom why anyone would think that taken away a women's choice is okay? Or that defining someone by their gender, size, or sexual orientation is okay? These are things I'm passionate about. I've learned how to understand others without giving up what's important to me. Yes, the block seems insignificant but in the end it's a building block (haha) for so much more. The struggle over the block requires patience, focus, energy, and- most of all- feeling passionate about something. These are things I want to encourage in the children who pass through my classroom! And now it's right here in front of me- a scenario where two kids feel so passionately about something that they can't quite give it up but they have the patience to not actively battle with each other. I realize that I'm okay if there isn't a solution- because they have already decided that not having a solution works for them. 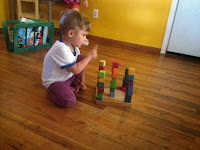 In the end, CE's continual efforts to engage her friends paid off. The block was used in a tower the trio built collaboratively. I'm happy to say that not a single word left my mouth during the entire ordeal. My presence was felt by all three, I'm sure, but the struggle and the end result were their own creations.
Posted by Melinda at 6:39 PM

Email ThisBlogThis!Share to TwitterShare to FacebookShare to Pinterest
Labels: Communication, conflict, The Work We do