The Provocation of Us 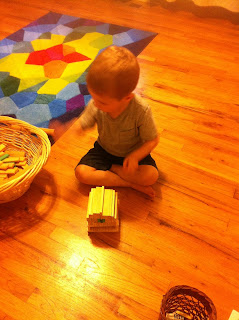 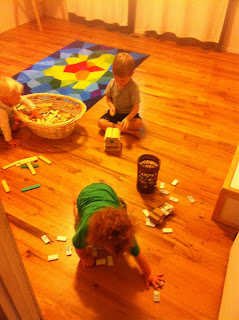 As teachers at Tumbleweeds we often seek to guide rather than "teach" in the traditional sense. A lot of this relies on scaffolding and emergent curriculum. A lot of that relies on provocations. We set up the environment to inspire. I bring a bit of myself into each provocation I set up. I have an idea of how I want the provocation to speak to the children. I have an ideal of how they might react to it. Even if I don't consciously realize this, it is often the case. It's hard to separate ourselves from our work at times.

As I watched from the door of the back room, where our construction area lives, I realized that the children do this as well. They are, in a sense, a provocation to other children. When kids are intensely engaged in what they are doing, other children are drawn to join them. This is exactly what happened with JH in the back room. He was working very hard to build a tower. He told me, "I want it to stay and I want it to be very tall." I nodded, "It can be hard to do both." QM and LC eyed him carefully. They could see the concentration on his face. Slowly, they moved away from JH and found their own materials to build with. 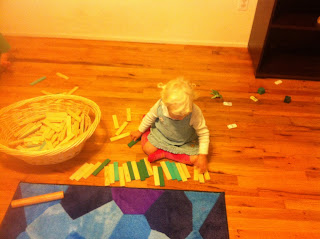 LC found citiblocks, which JH was also using, and began laying them out in a horizontal line. She laid each block vertically and directly next to the one she had previously set down. She worked carefully and was completely focused on her building. It was almost as if QM, JH, and I ceased to be in the room with her. 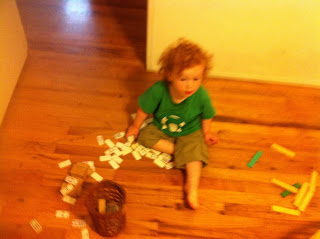 QM found the dominoes and brought them down from our shelf. He began to lay them somewhat haphazardly next to his leg. Then looked up to view JH's progress on his structure. 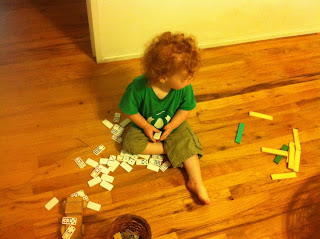 Next he looked to LC. He watched her build her horizontal line for a few minutes. He called out to her a few times, but LC was too absorbed to respond. 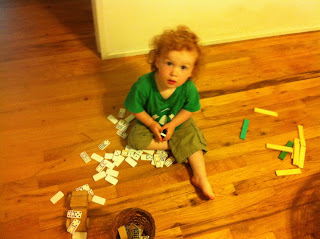 Next QM looked up at me. I said "You are building with dominoes." He nodded and said, "Otay." 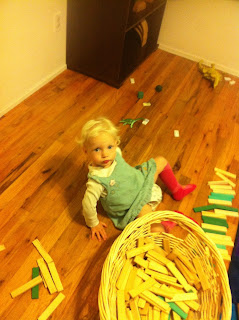 As QM built and observed the room, LC finished her horizontal line. She leaned back and surveyed it thoughtfully. Then she looked up and noticed me taking pictures, clearly having forgotten I was there. 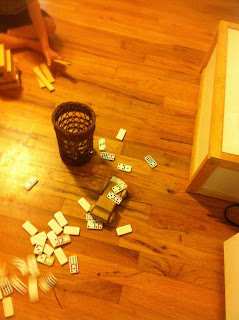 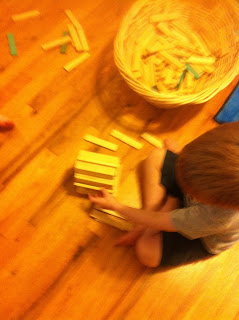 In the end, JH built a tall but stable structure. LC's horizontal line lived on. And QM's dominoes found their way to the back of a small, wooden truck. The intense focus of JH as he built his structure acted as a provocation for LC and QM to use the building materials in their own way.
Posted by Melinda at 1:24 PM