Water play is still a huge element with Cohort 5. We often incorporate it into our daily routine. The children are still intensely interested and focused on splashing, pouring, and transferring the water. However as I watched them work with the water this week I noticed something new developing in their play. Typically when we play each child is focused on what they alone are doing. They may pause to negotiate a trade or acquisition of a tool from another child. They may stop and simply watch what another child is doing. They may even interact briefly with another child, but their most important task at hand is their own work. 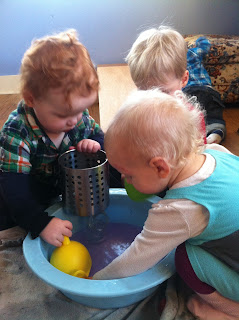 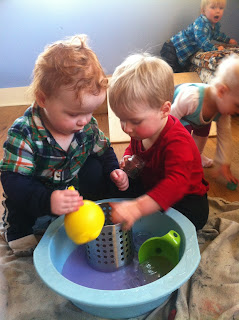 However, this time as I watched them I noticed both QM and IS coordinating their efforts to use some of the new tools I'd brought out with our water play. IS held the metal container with holes still as QM attempted to fill the funnel and pour it into the container. Each child had their own role and each of them seemed to know what the other was responsible for. IS did not move the metal container even slightly as QM tried over and over again to pour water into it. Eventually LC noticed their focus and walked over to watch them. She splashed in the water as IS released his grip and let QM take hold. QM picked the container up to see if that would make transferring water from the funnel to the container more successful than their previous efforts. After each pour IS would look inside of the metal container to see if there was any change. 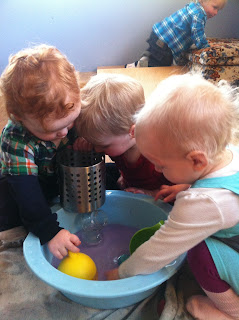 IS and QM's play grew into a collaborative effort that required both children to attend to another child's needs and interests. They were joined together in a common goal: transfer water from the main container to the metal container via the yellow funnel. Each child had a role in this joint venture and waited patiently as they played out that role. When it didn't work, IS voluntarily gave up his role to QM but stayed close to see if QM could accomplish the task. This coordination and collaboration has given me multiple new ideas for how we can approach our water play!