On August 21st, 2017 we were fortunate enough to be able to experience a Solar Eclipse right here at Tumbleweed. This once in a lifetime opportunity wasn't going to pass us by, so we decided to come up with a plan to make our own pinhole cameras. 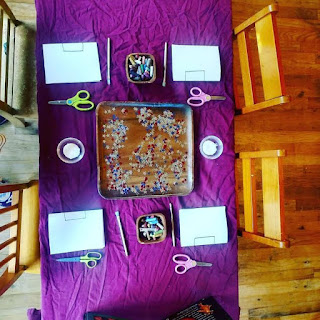 As we were constructing them at the table, A noticed a book on the table with a sun on it. We talked about how it's not safe to look directly at the sun without special glasses. I told him that these cameras we were making were the safest way to view the eclipse because it would cast a shadow on the ground instead of us having to look up at the sun. 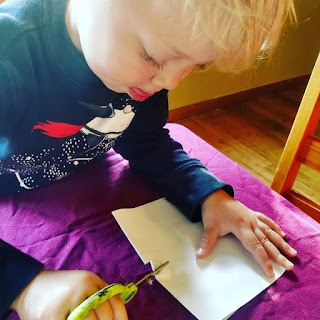 After A cut out the hole in the paper, he decided it needed to have some decorations on it to make it unique and his own creation. We then taped a piece of aluminum foil over the hole and poked several holes in it to make sure that the sun's light had somewhere to shine through. 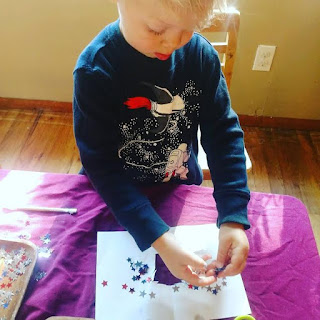 It was time to put our camera to the test! The eclipse was starting to happen so we headed outside. We instantly noticed the temperature change and the light outside dimming. A started to get excited, running around the backyard yelling, "Sun! Stars!" and quickly grabbed his camera to check out the placement of the moon. I showed him how to stand with his back was against the sun so he could see his shadow. 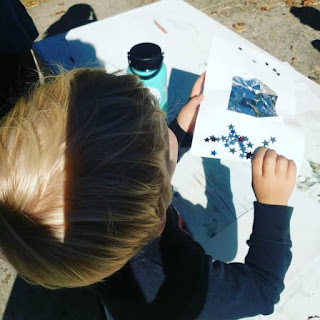 As A positioned himself, he held up his paper and then observed the table in front of him to see tiny crescents! The moon was almost completely over the sun! 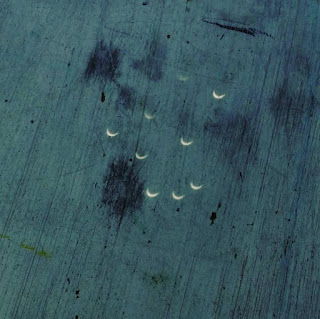 A laughed and continued to run around the backyard, giggling and observing the sun's light grow dimmer and dimmer around him as he held up his pinhole camera. We were so incredibly lucky to be able to witness almost full totality during the Solar Eclipse!

Posted by Alexandria at 3:35 PM