But Why?: A Realization on Limitation

During my first week at Tumbleweed,  I heard this question more than I've ever heard in my years of teaching, which came as a surprise to me. Children at the preschool age are at a crucial time in their life, constantly questioning, absorbing, and learning while at the same time adapting to new situations. Understandably, it can be a bit overwhelming to children, making them ask the infamous question we all know so well: "But why?"

The question is a situational one, and can come at unpredictable times. Even though I heard it often this week, there was one occasion that stuck with me and made me truly ponder what the statement "be careful" means to me as an educator.

While on the playground I observed B and E playing a game that involved them running towards a wooden wall while at the same time grasping for the rope to keep them afoot on the wall. Not being fully aware of their full potential, I intervened and called out "Be careful." E looked at me and without skipping a beat called back, "But why?"

I didn't have a response back, and realizing my mistake told him he was right and that he knew his body and limits more than I could ever understand.  He smiled back, said that's OK and continued to run, climb and have a blast testing the limits of his body. 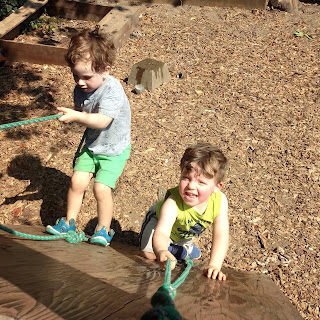 Its important to recognize when there are limits set on children that could possible be detrimental to their full potential.  How are they to learn, adapt, and grown if strict limits and negative language is placed on them during crucial learning opportunities?  The event that happened that day on the playground made me stop and reevaluate how often I use the term "be careful" as a filler instead of fully evaluating the growing opportunity that has been presented to me.

The very next day I was presented with more opportunities that could of ended with me stating  "be careful". Instead of intervening, I made myself present to them and sat back to observe and let the children grown, adapt and learn on their own. Whenever I felt tempted to utter the words again in the situations that I felt could potentially be crucial learning opportunities, I instead thought to myself,