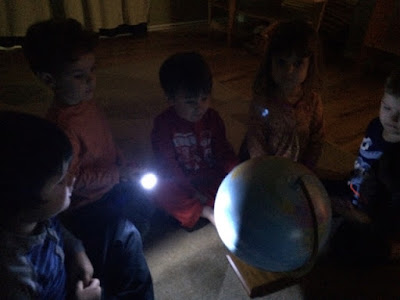 During group time one morning, the children entered the room and everything was dark.
"Why is it so dark?" They asked, and I explained that we would be having group time in outer space today.  Everyone seemed to agree that this was a great idea, especially once I switched on the flashlight.
"The brightest light near the earth is the sun," I explained.  Then shined the light on our globe of the earth.
"The Earth!!!" everyone cheered and I brought it closer.  We played a game of the Earth going around the sun, while singing a song: 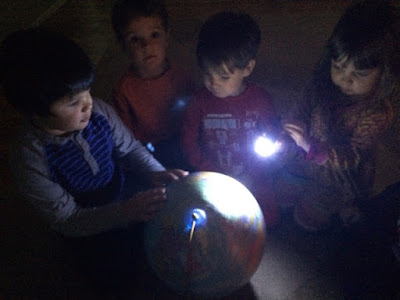 When the game was over, we all sat down and got close together.  One child held the Sun (a flashlight) while another child slowly spun the Earth and we talked about night and day.  One child said, "So are we astronauts?"
"Great question!  Are we exploring outer space?" I asked.
"Astronauts don't live in space," someone else said and everyone agreed.  Then the idea of being visitors, going out into space to gather information then return home came up.
"We are explorers!" Someone else said. 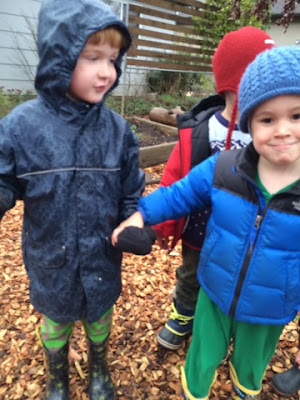 Then one day, we all became explorers. 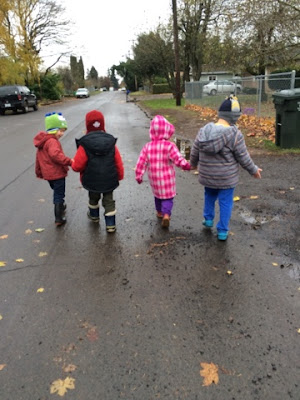 "Ok Everyone!  We are going to go on a walk!" I announced and the children who were interested joined me on a walk down the road.  We are very lucky to have unimproved road ways not too far from the school, which offer tiniest bit of wildness to our every day explorations.
Before we began walking, we went over the important rules: hold your partner's hand, move to the side when there is a car coming,  stay ahead of the teacher, don't run!, be safe.   Then the children began asking me where we were going. 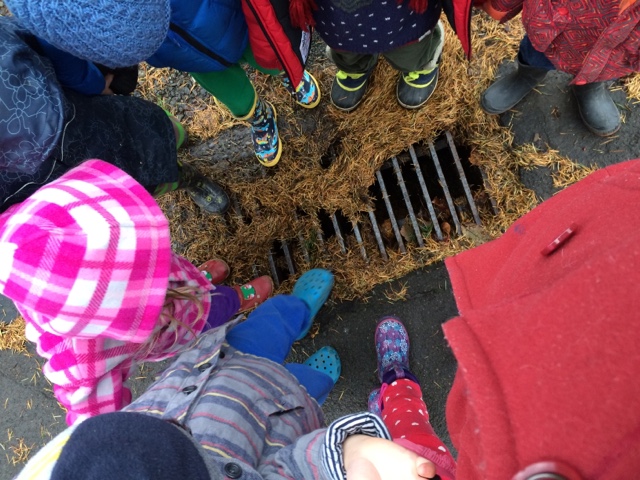 "We are going on a walk," I said, leaving it very open ended and ambiguous.  "I wonder what we will find."
"Are we going to the park?"

"Are we going to the Infant House?"
"Sometimes we go on walks to collect special leaves"
Their answers were searching for some verification of what we might be meaning to accomplish by our walk, so I offered this as a reminder of our earlier conversations about astronauts.
"Today we are simply going to explore and see what we can find.  It could really be anything.  It's kind of like the astronauts!"  This idea caught on quickly and the children were excited to see what we might find. 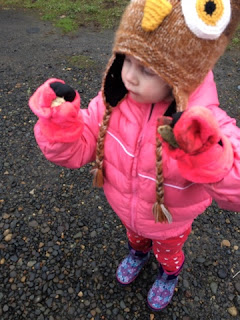 And what we did find was a huge, huge puddle which had filled in a low spot in the unimproved road down the street.  The children know this place well,
because it is next to the huge blackberry bush.  But today it was transformed into 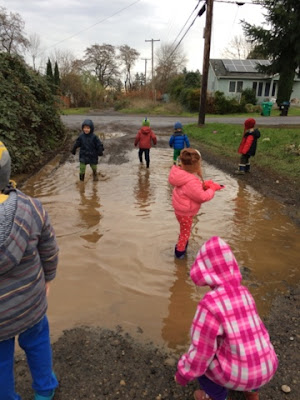 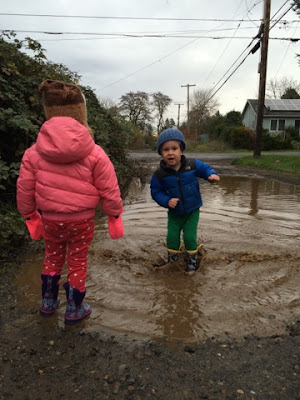 a new land, which they could splash through or toss small rocks.  On the way back we collected some treasure in the form of small white rocks.  The explorers returned satisfied, yet ready to gain more knowledge on future adventures.
Posted by Briana at 7:19 PM