Sharing (And Not Sharing) 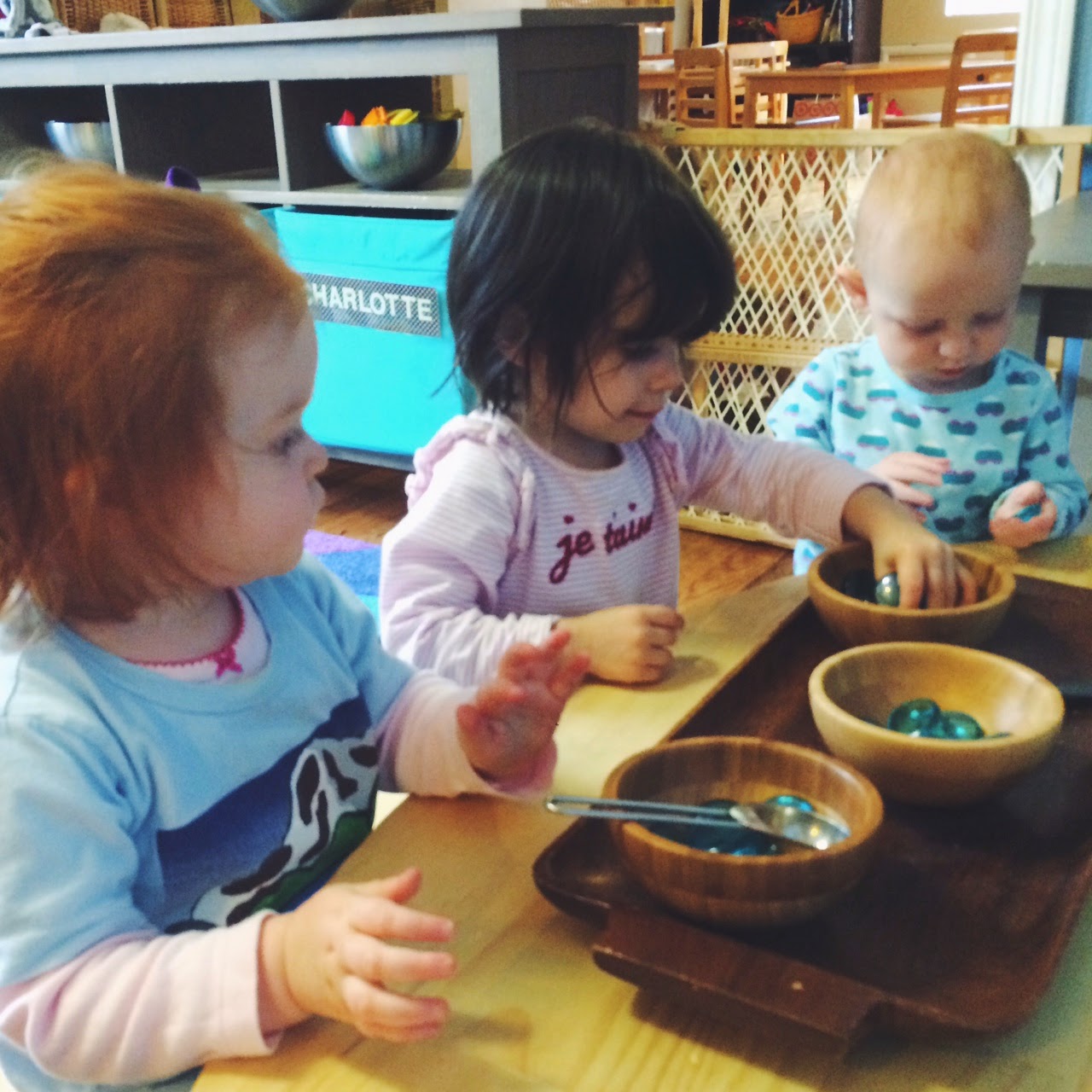 One child is holding a special toy.  Another child really wants to look at it.  The first child stamps her foot and says "No!  I need it!" 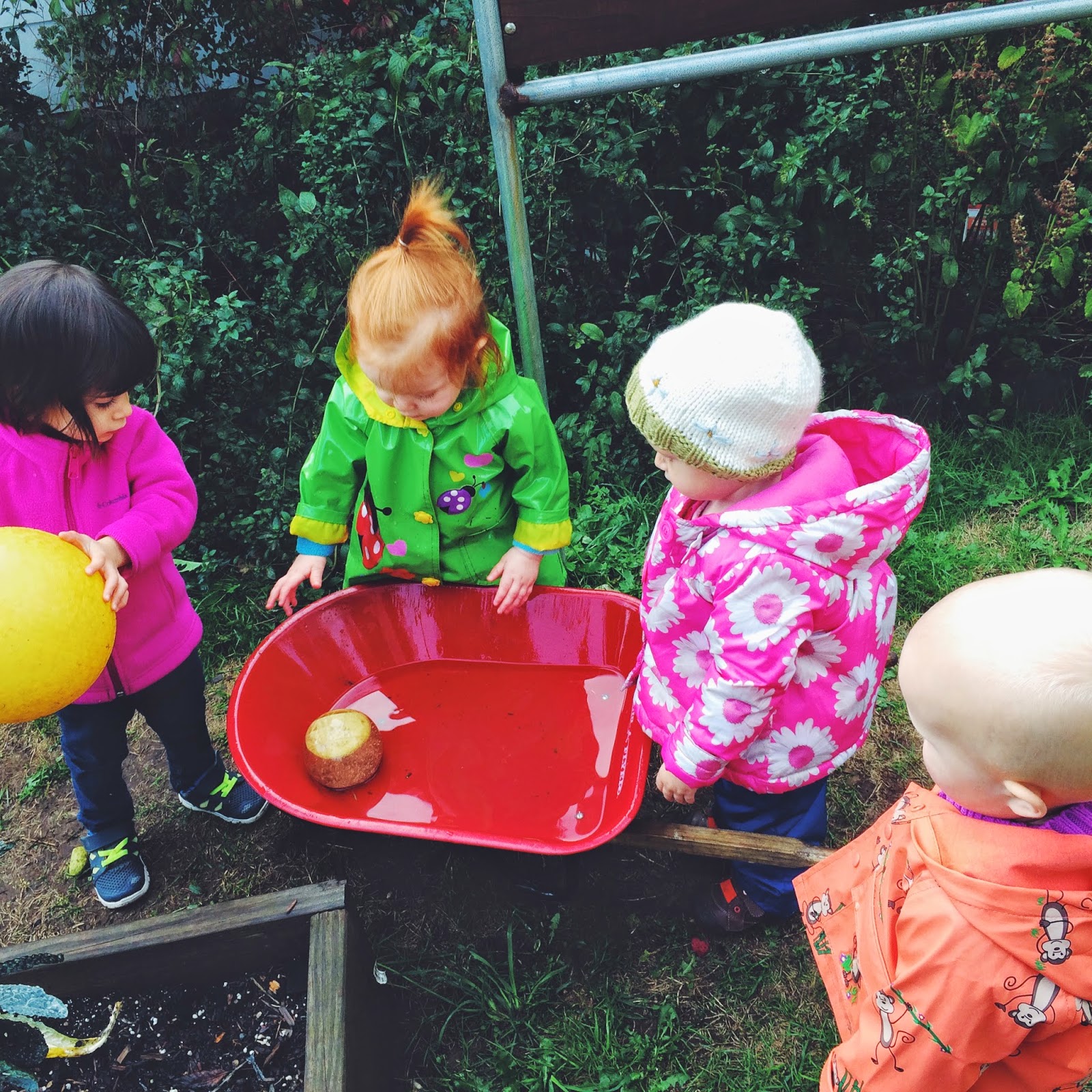 One child is playing quietly with a ball outside.  Another child approaches, holds out a hand and says, "Please?"  The first child shakes her head "No," hugs the ball, and smiles. 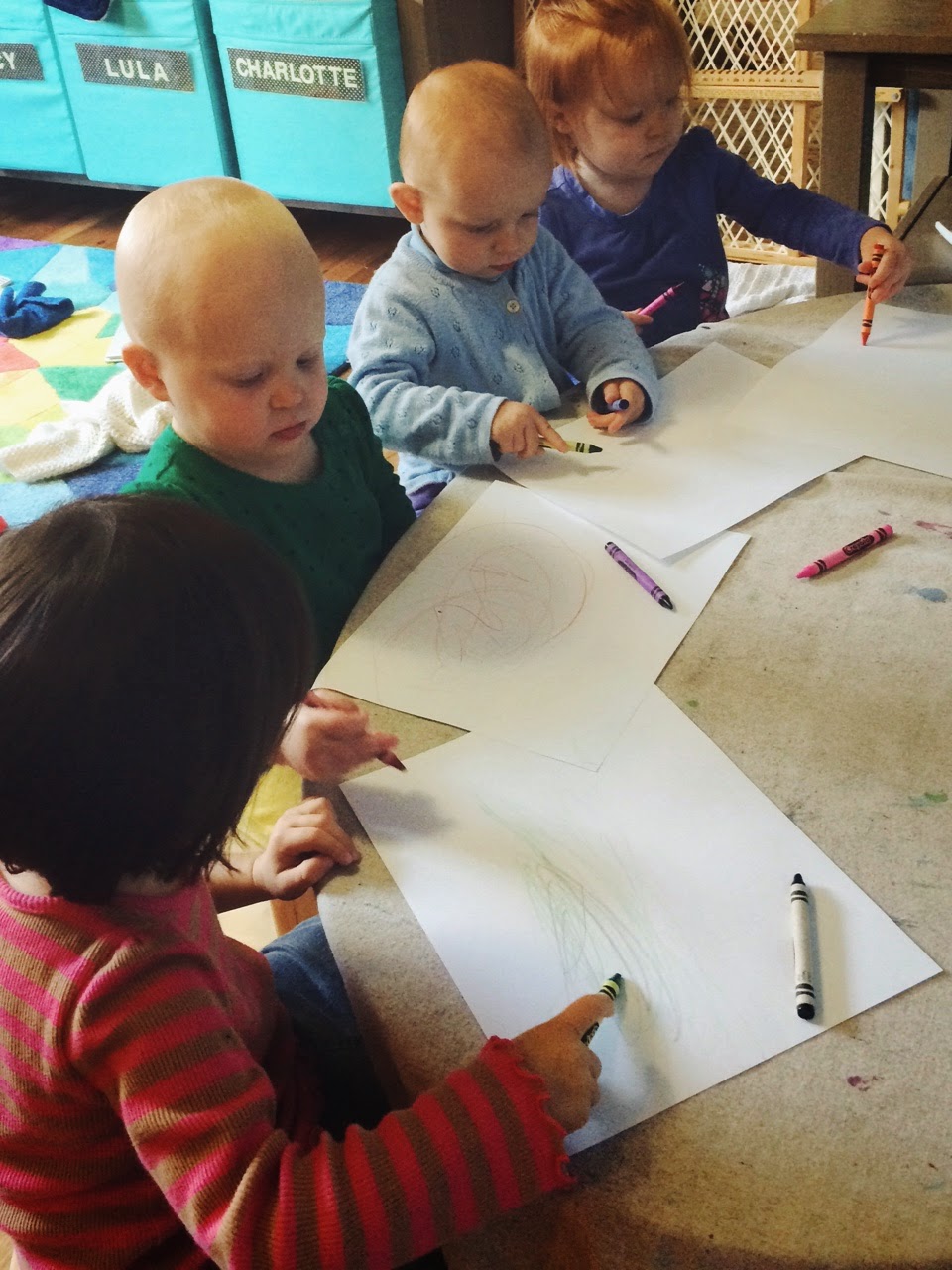 One child is drawing with crayons at the table.  Another child sits next to her and tries to take a crayon from her hand.  The first child moves the crayon to her other hand, farther from the other child, and continues to draw. 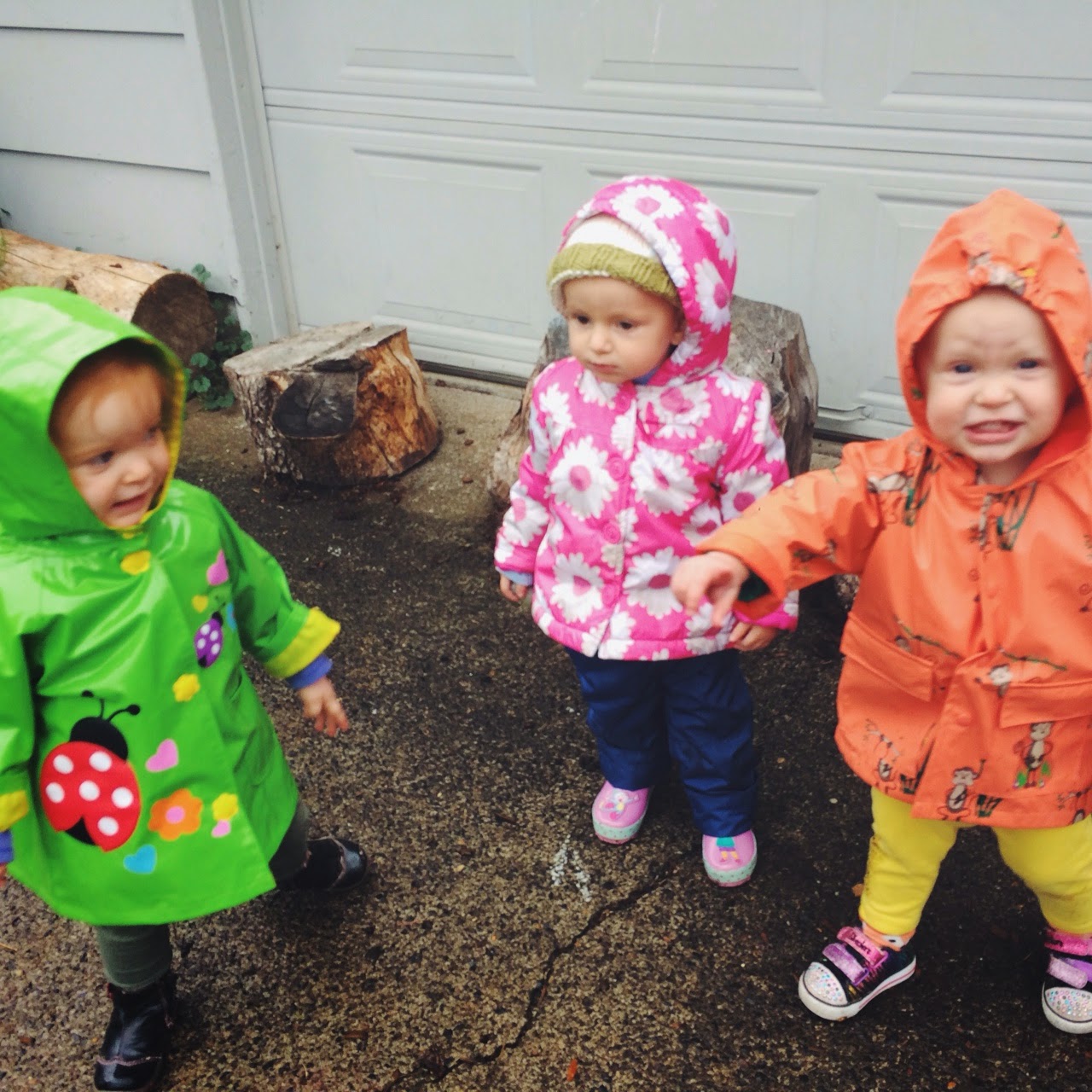 Observing these interactions I am impressed by the ability these children have to speak up for themselves, both verbally and non-verbally. What an important skill to learn: I have the power to tell people what I want, with some of my very first words, or sometimes with no words at all. 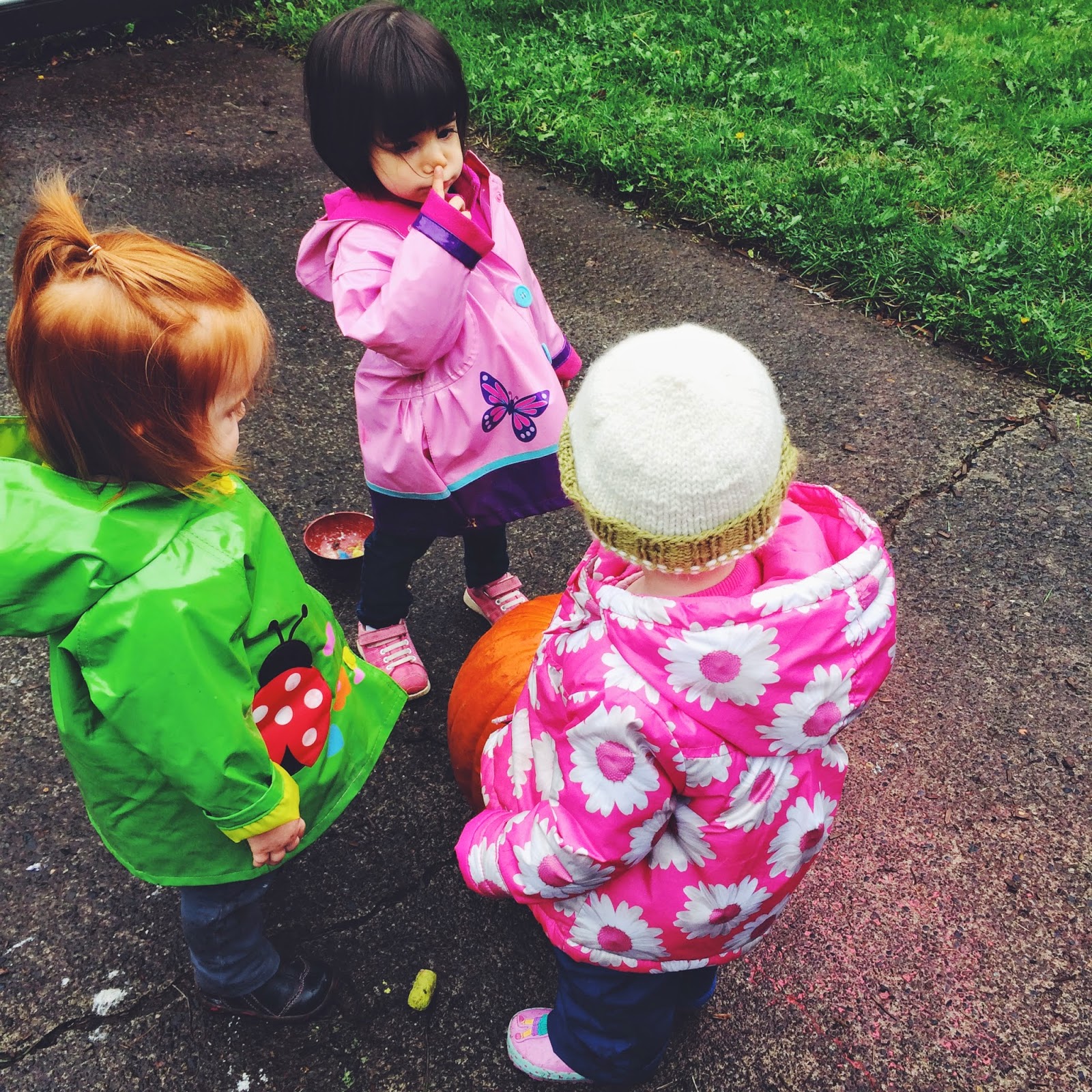 As the play in Cohort 9 becomes more and more interactive, these interactions and skirmishes over toys, personal space, and wanting a turn will only increase.  As the adult in the room, I hope to help the children to navigate conflict, to stand up for themselves, and to understand their friend's feelings.  If the solution comes from me ("You have to share," "It's not your turn") the children might learn how to please me by passing toys from child to child, but they won't learn how to find their own solutions to conflicts. 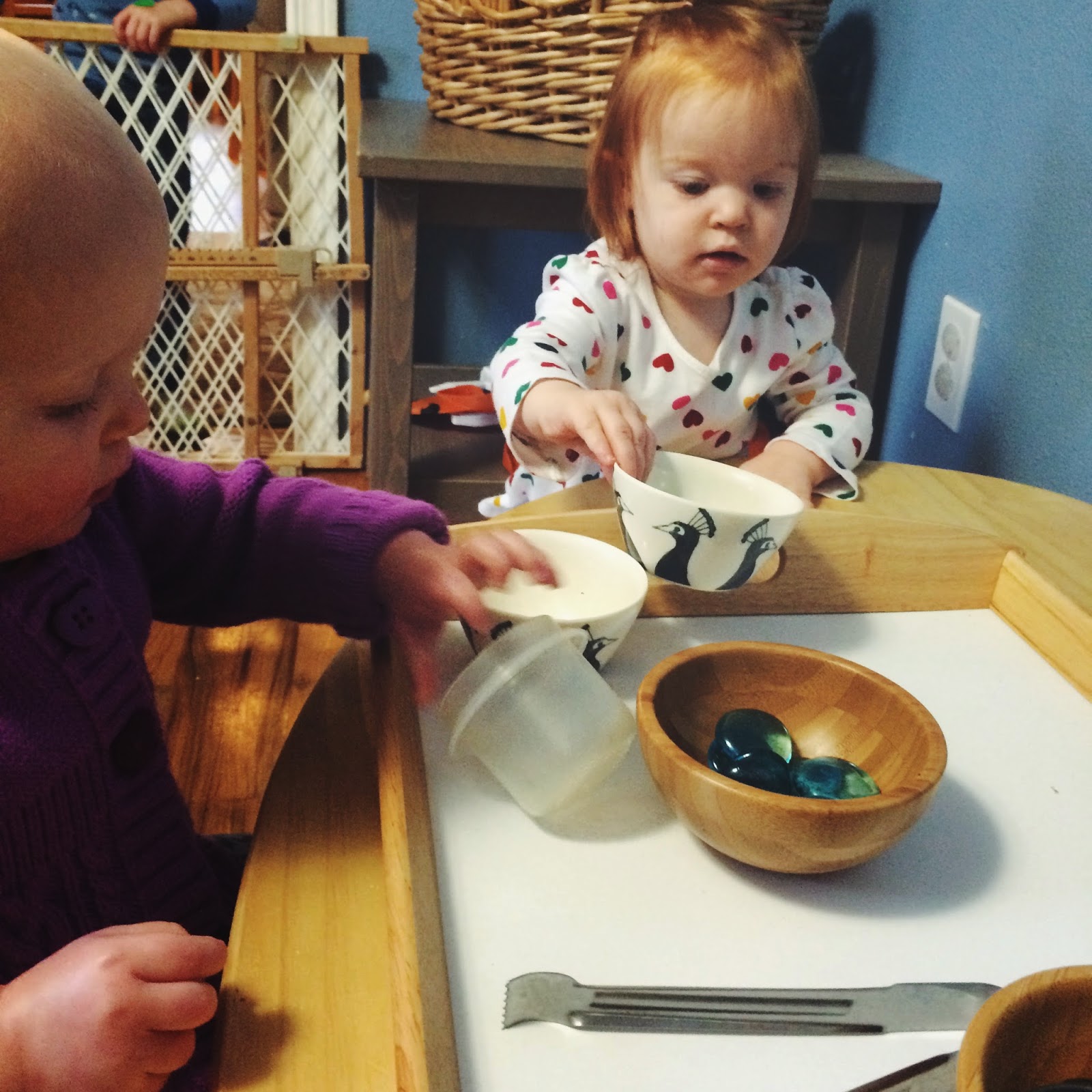 In another interaction, one child was playing with a bowl that had been placed on the table for a pouring provocation.  Another child sat down and attempted to take the bowl.  There they sat, each with a hand clamped on a side of the bowl.  One child is saying "No!  No!  No!"  The other is frowning and pulling on the bowl.  My role in this situation is that of a close observer and impartial narrator.  I sit close to the children and offer observations and reflections:

"Wow, you both really want that bowl!"

"You are holding on tight.  You want to take the bowl and she doesn't want you to take it."

"I can see on her face that she is feeling upset because she wants to take it." 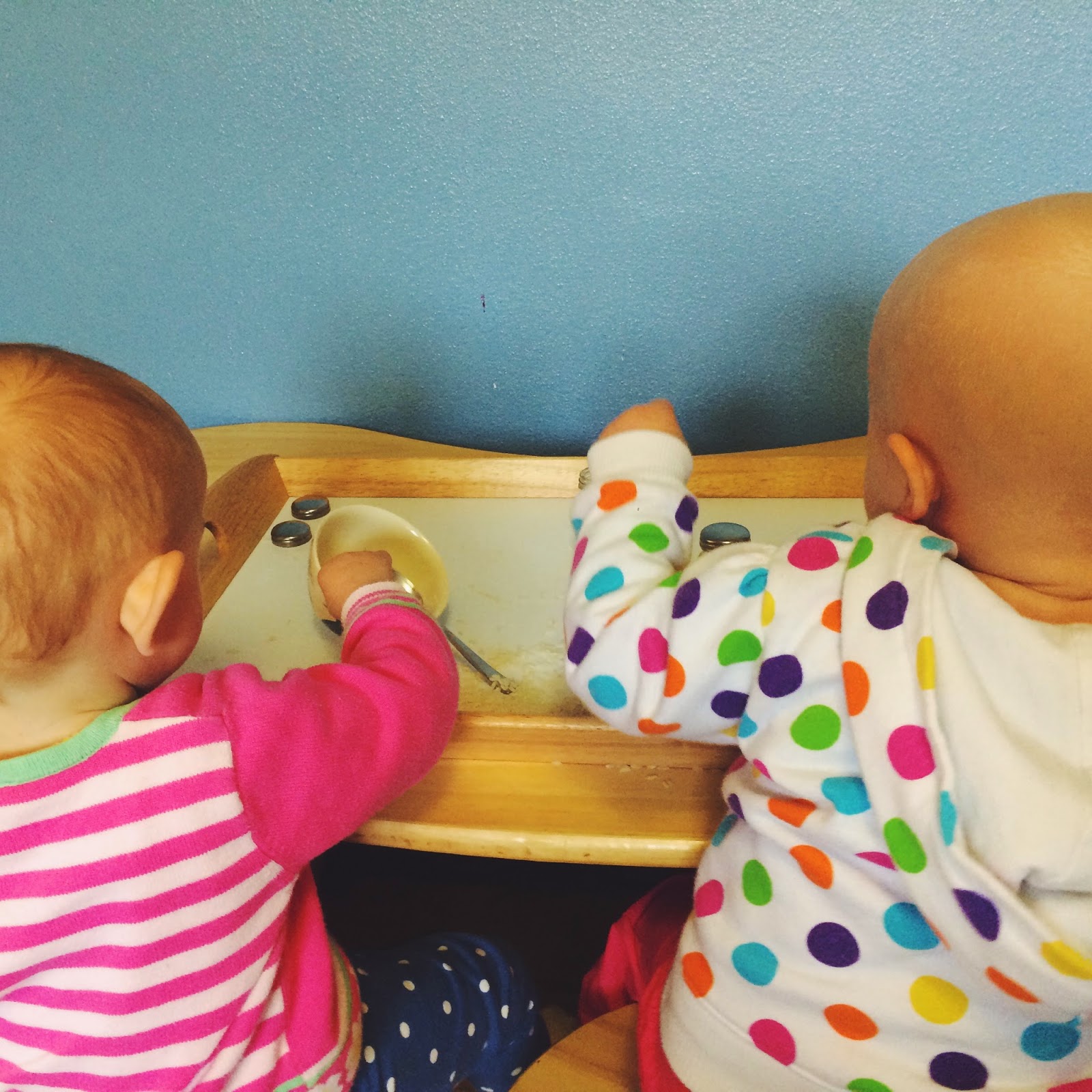 When the bowl is pulled so hard that I'm worried one child will let go and the other will get smacked in the head, I put my hand on the bowl between the children and tell them "You're both pulling really hard on the bowl.  I can tell you really want it.  I'm putting my hand on the bowl because I want you to stay safe.  It didn't feel safe to me when you were pulling the bowl so hard.  That wasn't working." 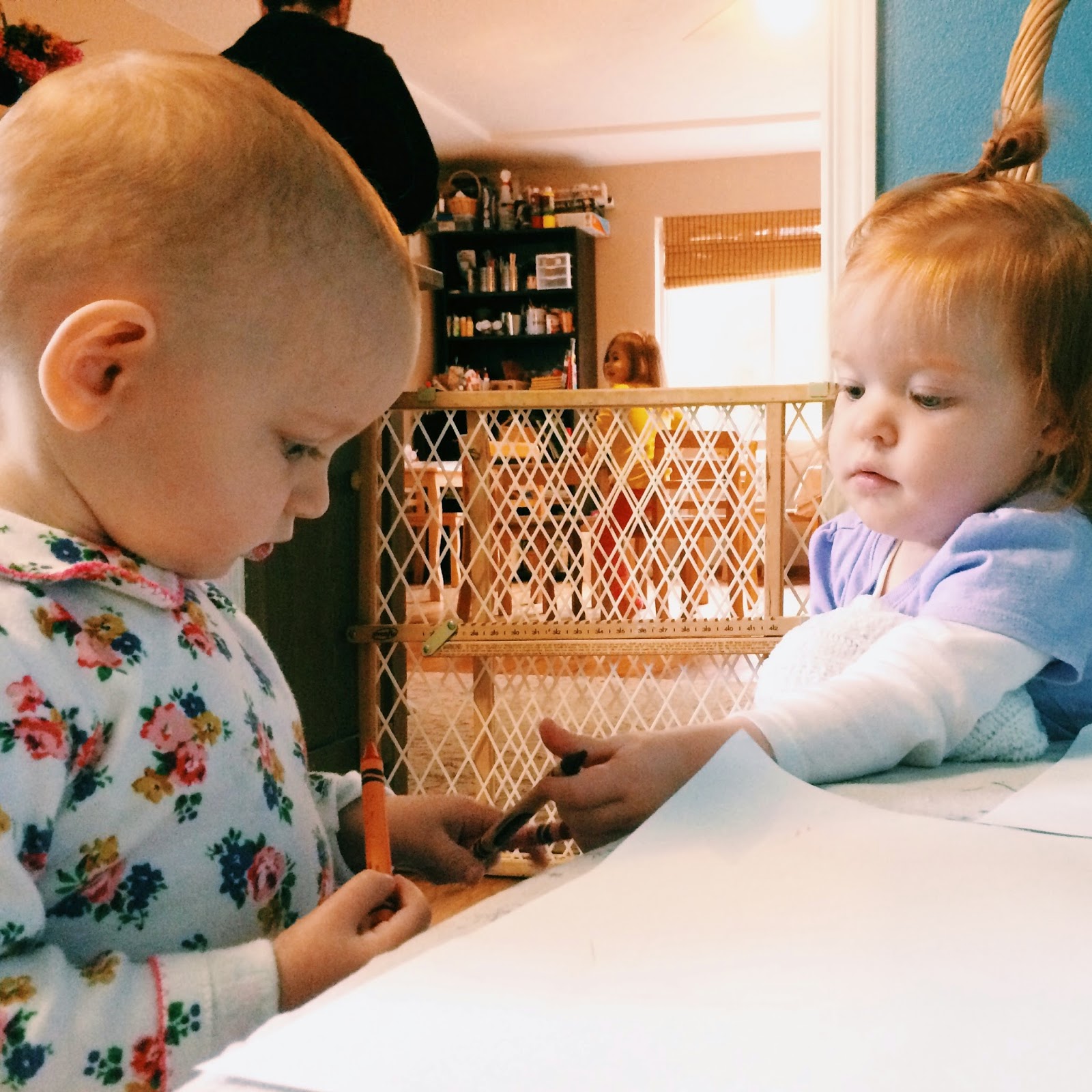 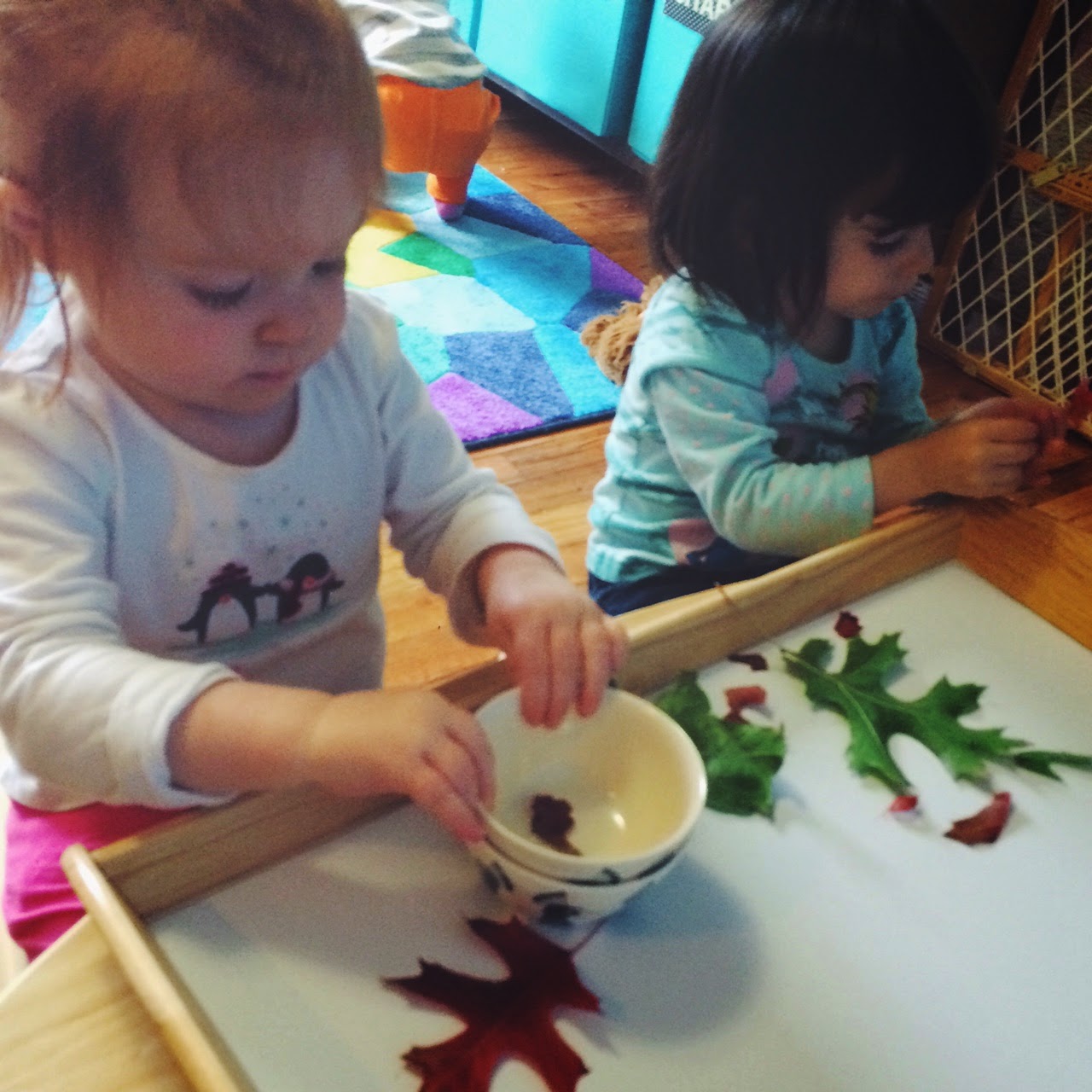 What happens at the end of these disputes over toys?  Usually, one child ends up with the toy.  The other child may feel sad and come to me for comfort and to work through what just happened ("You really wanted the bunny.  It's hard to not have the toy that you want.  I wonder what you're going to play with instead?"). 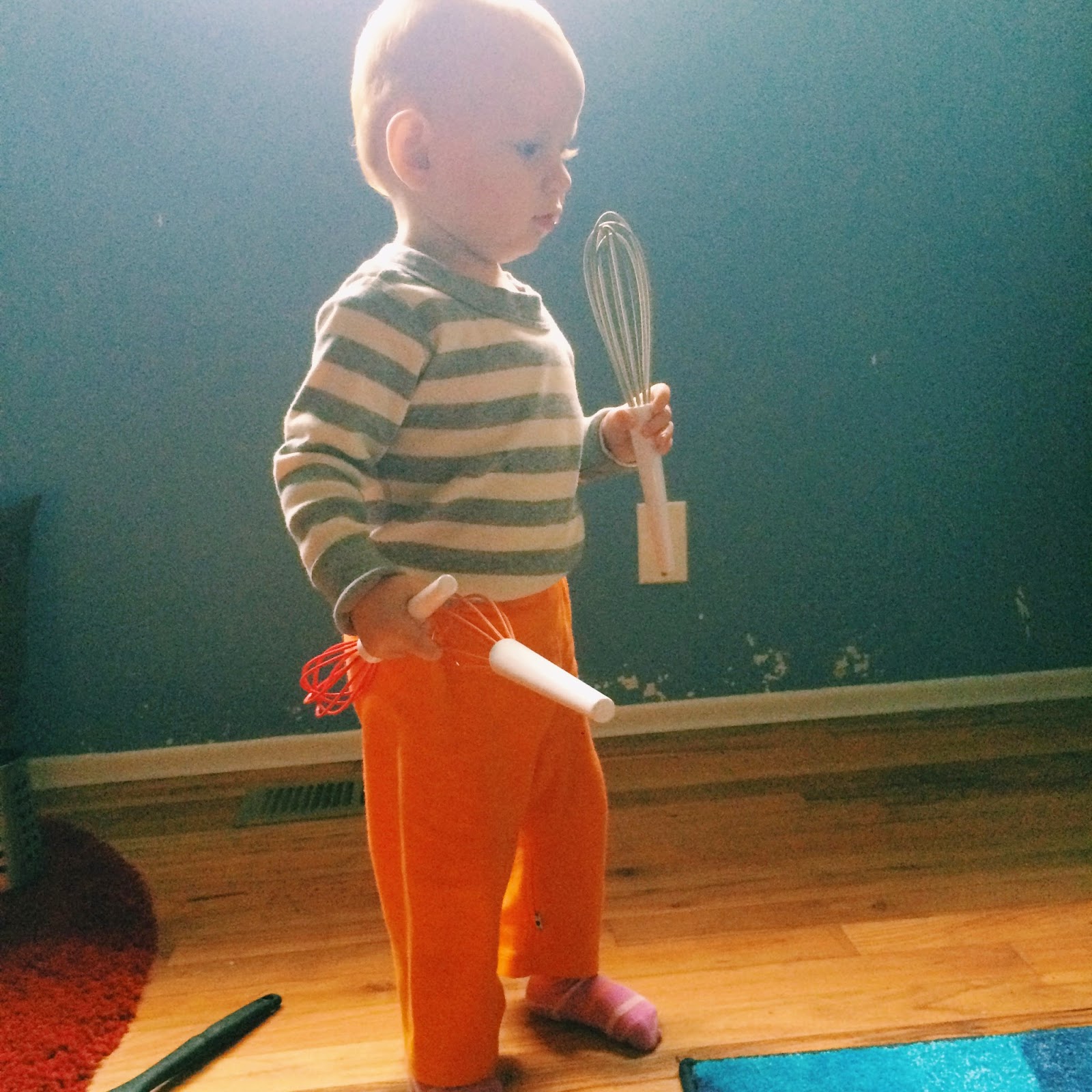 Other times, once one child decides she is no longer interested in the toy and moves on, the second child will follow her right to the next toy she finds interesting.  Sometimes what makes something interesting is that someone else is interested!  Our friends are fascinating and when they find something to play with of course we want to play, too! 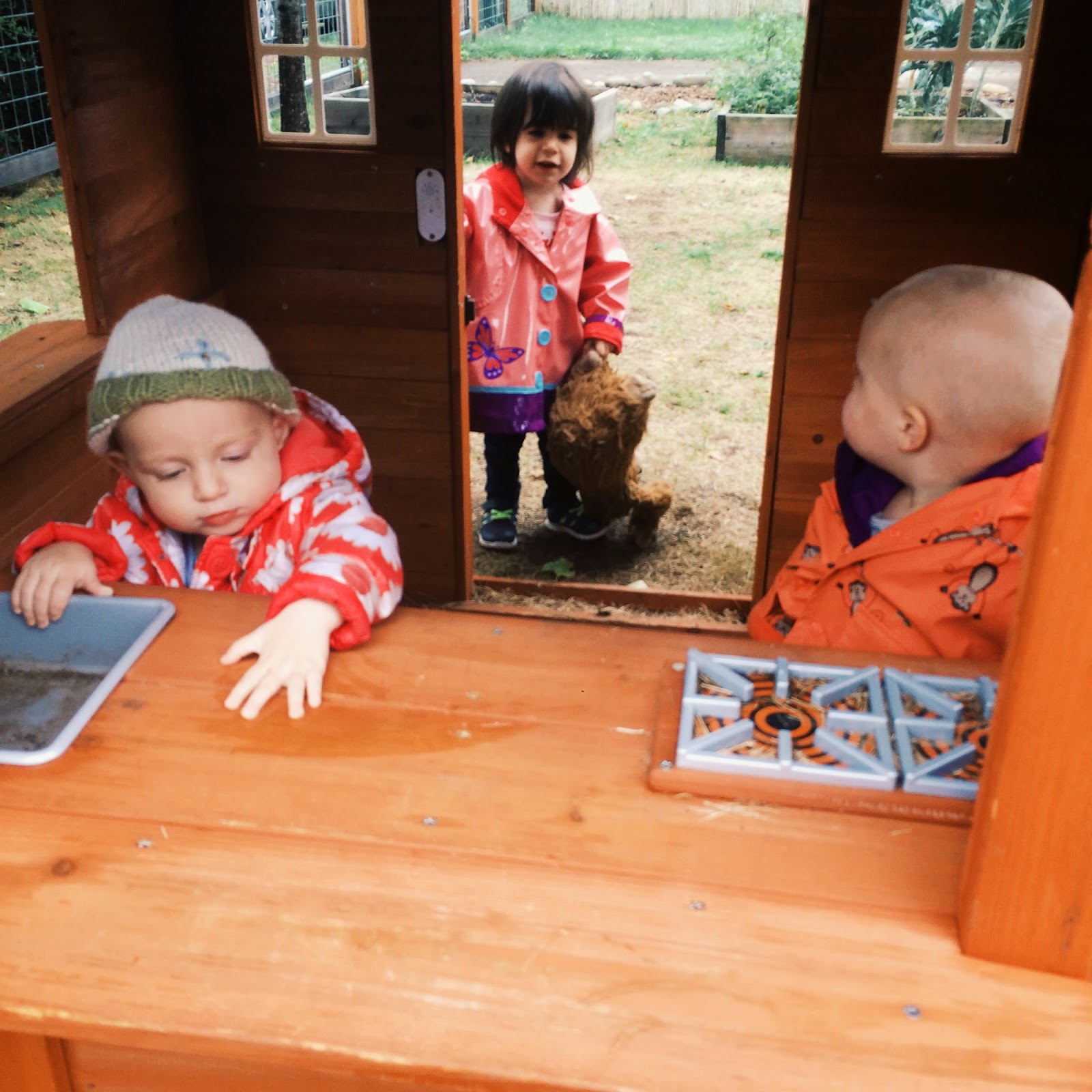 Each day in a toddler cohort is filled with negotiations.  With my presence, I can help to give framework to those  negotiations to help the children learn to problem-solve, to self-advocate, and to notice the feelings of others.