Writing Group: All about D 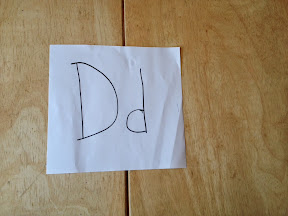 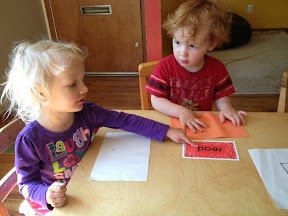 The other day Rio and I traded places. I led writing group when normally Rio leads it. First, I invited a few children to stay inside for group. I had quite a few takers and quickly we transitioned into one small group inside and one small group outside. I set up our big table with paper, word cards, writing utensils, and a large white piece of paper with a capital "D" and lower case "d" written on it. I gave those in my group a moment to find a seat and take in what sat before them. TUS quickly spoke up, "That's a D!" 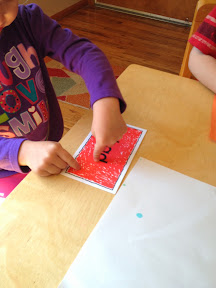 "Today I thought we'd talk about the letter "d". What do you guys think?" I inquired. TB quickly spoke up, "Yeah! D is used a lot. Like dog or dinosaur..." I stayed silent as everyone thought for a moment then LC piped up, "Daddy! Daddy!" TUS and TB agreed, "Yeah! Daddy starts with "d", too!" 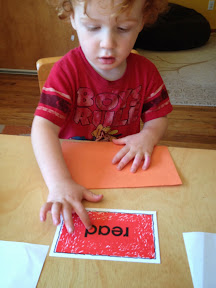 TB studied the paper for a moment more then looked me straight in the eye, "Hey, are those both d's?" I nodded, "This one is a capital "D" and this one is a lower case "d". The important thing is they are both the same letter, but we use them at different times." I slowly wrote out a name that began with a "D" and the word "dog" as I continued, "When I write someone's name or the name of a city, I use a capital "D". When I write a word like dog or diamond I use a lower case "d". No matter which one I use, though, they are always the same letter." I then asked them if they'd like to write some d's of their own on their paper. Everyone was very ready for that task so we each took a turn individually.

Every child focused while they worked on writing the letters on their paper. Some chose to write both a capital and a lower case letter while others wrote just one of the two. When everyone felt finished TB held up his word card, "What's this for?" Before I could answer TUS yelled out, "I found a "d" on mine!"

"TUS says he found a "d" on his. We often talk about what words begin with the letters we are talking about, but it's true that letters are all over in words. Sometimes they are at the beginning, sometimes they are at the end, and sometimes they are somewhere in between!" Everyone's attention turned to their cards as I spoke, they all worked to find the "d" on their card. Then we read each card aloud and talked about the other letters on them. TUS noticed an "o" hanging out on his card and two different cards had an "a"!

To end our group, I asked everyone to try saying the letter "d" while paying close attention to their mouths and tongues. QM repeated "d" to himself softly for a while before shouting, "I use my tongue!" TUS embellished on this, "My tongue hits the top of my mouth! But only for a little bit." TB remembered what a "T" felt like in his mouth and said "It's not like a "T" because a "T" hits your teeth, but a "D" hits your mouth." I nodded, "A "d" and a "t" sound similar, but they are a little different. To make a "d" your tongue touches the roof of your mouth. When you say the letter it hits it for just a second, but when you make the sound a "d" makes your tongue hits the roof of your mouth a little longer." We all repeated our letters and sounds for "d" a few more times before cleaning up and heading outside. Our group brought so much knowledge to the table about "d" and what a delightful discovery we had together!
Posted by Melinda at 5:39 PM