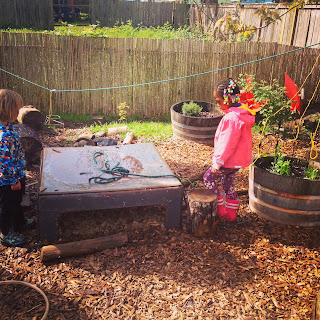 Most of our materials outside are found objects or objects from nature. The long, clear tubes are among the many choices of found objects. They are used for a variety of purposes that mostly center around water play- especially for transporting water out of the rain barrel!


The rain had left a small puddle on our outside table overnight. The kids often use the water to fish or float random objects in. Today they brought the tubes over and began fishing. Shortly the tubes began to enter their mouths, suck up water, and spit the water back out through the tube before it reached their mouths. 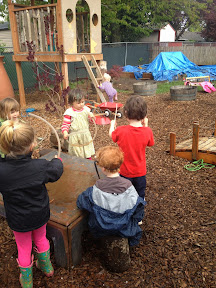 I felt uncomfortable as I watched them but took a moment to fully formulate why. Finally, once I felt ready, I walked closer to them. MR and TB announced to me, "We're elephants!" They spouted again to drive the point home. 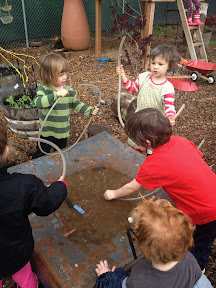 I spoke slowly, "I'm feeling uncomfortable about the tubes being in your mouths." MR took hers out and studied me as WK spoke up, "We're not drinking it. We're just elephants!" Everyone nodded in agreement and continued their game. 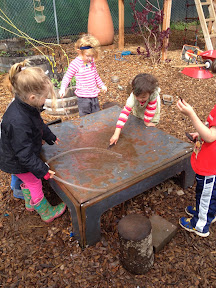 I spoke up again, "I hear you. The thing is those tubes are outside all the time and I'm not feeling comfortable with them going in everyone's mouths." I was met with looks of frustration, "I can tell that you really want to play the game... I wonder if there's another way to get water into the tubes?" 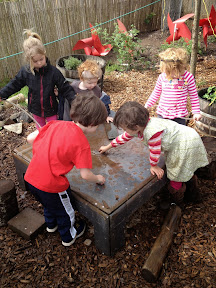 This last part peaked their interest. WK, MR, and TB were instantly united in finding a way to get water in the tubes. WK tried to use gravity to her advantage and get water in by lowering the tube, but there wasn't enough water on the table. MR tried sucking air ok near the tube opening but without a seal no water would come up. TB attempted to scrape water tongue side and catch it, but this proved to also not be very fruitful.

In the end, they ended up making the tubes snakes that scraped the water off the table slowly and surely. It was okay for each of them that none of their efforts paid off- the joy was in the discovery of all the things that didn't work.