The Language of Clay 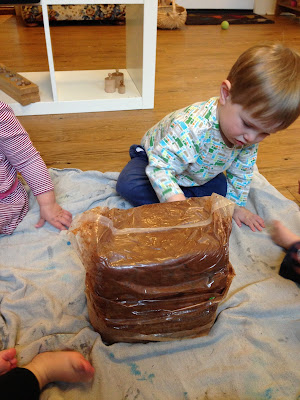 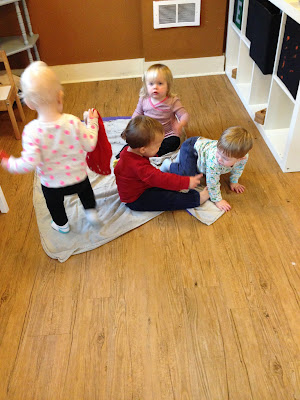 Today we took out our newly beloved block of clay.  Everyone was very excited when I spread the canvas on the floor.  They gathered quickly.  I carried the crinkly plastic bag, full of a heavy chunk of clay and invited everyone over.  They remembered the clay from our introduction last week and sat down on the canvas. 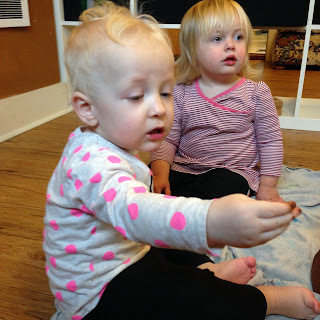 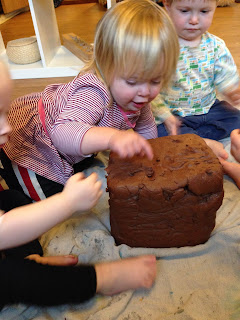 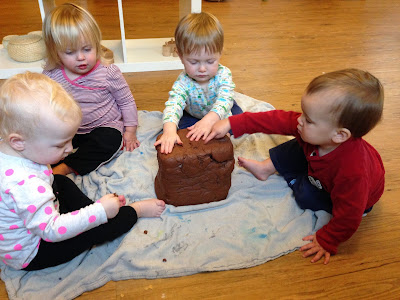 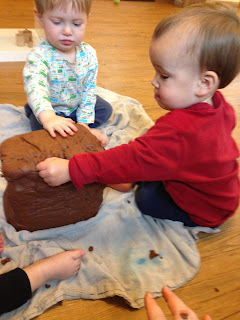 I opened the bag and everyone peeked inside.  I flipped it over and slowly eased the plastic off of the damp clay.  Everyone was beginning to feel impatient.  EC found a small strip of clay that was first exposed and scratched her nail across the surface.  She triumphantly held up the bit of clay on her finger nail to show me.  "Thatsss!"  We both smiled at her discovery.
"Shall we take the bag off?"  The anticipation was building.
Everyone made joyful noises and a few "yeah!".
"1 - 2 - 3!"  I set the bag aside.  Everyone began to manipulate the clay with fingers, nails and hands.  As they scootched closer to reach the clay, even knees and toes came into contact. 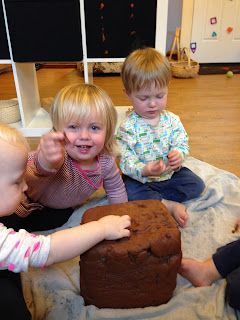 "Pat! Pat!"  said Z.  I smiled as he labeled his action and I copied him saying the same thing.  Everyone thought this was a grand idea and quickly our clay became a drum, punctuated by our fervent 'Pat! Pat!' chant.
"I wonder what else we can do with the clay?"  I looked around.
"Oh look.  C is poking it.  You can poke the clay!"  With an exaggerated movement of my pointer finger, I poked downward at the clay with a "Poke!  Poke!"  Everyone thought this was a great idea and joined in in the poking.
I repeated my wondering and noticed I was talking quite a bit more than normal today, "Poking feels good!  I wonder what else we can do?"  I look around.
"Oh look!  EK is scraping with his nail.  Then he has a little piece!"  I slowly and carefully copy his motion.  I narrate what I see and what I wonder.  By the end we were pounding, pinching, hitting, tasting, toe-ing and wiping the clay. 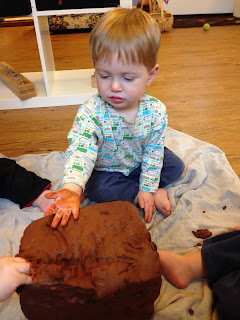 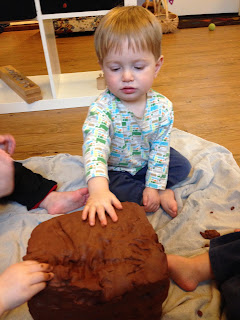 This process arose naturally from the children, stemming from their interest but also where we are developmentally.  We are smack dab in the middle of a language bump and I am constantly looking for moments to snatch up ways to extend their steadily growing language.  When Z labeled his own actions, it was an open door for us to go further with this concept. Today I used language as our tool during our interactions with clay.  Even though many of the words that I used were above their ability to reproduce, we were building brain connections.  The words are now directly connected and categorized and later will be used, because of the repetition and hands on work we were doing. 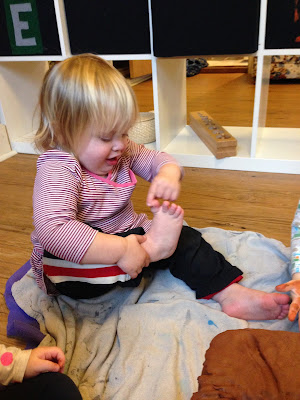 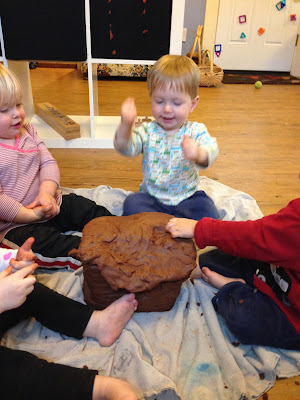 Email ThisBlogThis!Share to TwitterShare to FacebookShare to Pinterest
Labels: art, Cohort 6, Communication, Language, The Words We Use