BRA is for Brains

Why Brains?
We're building on what we started yesterday and the day before.

How Did I Invite Them?
I took some tickets and a sharpie outside.  I quietly walked up to the children who had previously shown interest, and I whispered, while writing a B and an R and an A on the ticket, "Are you interested in coming to do some research in the BRA [making the sound bray] for Brains group?  Yes?  Here's a BRA for Brains ticket!  AND today, you each get to choose one friend you want to share a ticket with.  When you give them a ticket, you can invite them to come to our BRA for Brains group so we can tell them about the stuff we're doing!"

How Did I Set Up The Group Area?
I drew squares for hopscotch with chalk and bought some long rope.  I decided to video document today.  While I was setting up, I found a grasshopper!  SCORE.

What Was My Intention For Today?
Since we'd done two days of researching and drawing, I wanted to change things up a bit and do a kind of gross motor application of what we'd been learning.  I also wanted to be able to include more children in the activity so that the current Brain group could show their expertise, we could build on our sense of community, and the other children could get in on the action. 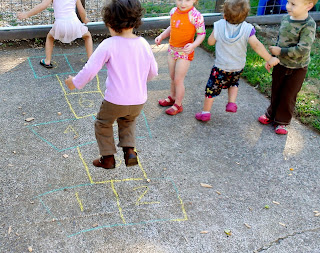 What Did We Do?
We watched the grasshopper jump!
We tested out our cerebellums with jumping and balancing feats!
The children created their own games and tests for jumping and balancing!
They negotiated roles, turns, and goals for play!
The original Brain group children shared their passion for brains, celebrating with the other children as they sent messages about movement from their cerebellum to their bodies!
We noticed that at first some of these activities were tricky, and then we gained skills, and they got easier--Thanks cerebellum for working so hard! 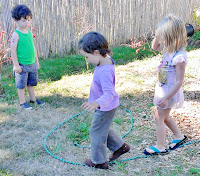 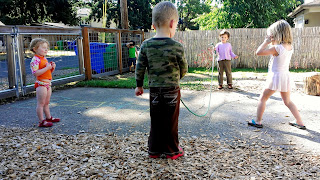 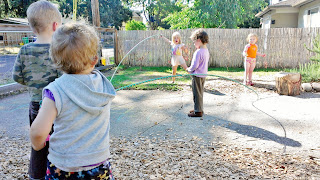 Also, before we started M asked me what letters were going to be on the tickets next time.  "Do you have an idea about that?" I asked.  "Well, I don't think we can fit any more letters!" she said.  I smiled and replied, "We'll have to wait until tomorrow to see!"

Here are a couple of videos!  Turn your volume down because I'm really excited and close to my phone.