Often, what we do at Tumbleweed is about observation and context, much like real life. Words or deeds that are helpful and comforting in one situation may be invasive and destructive in another. For example, throwing sand in the air when no one is close by is a harmless activity. But the same action performed when people are within range can cause pained eyes and itchy heads. So.... sometimes, throwing sand... OK. Sometimes, throwing sand... not OK. 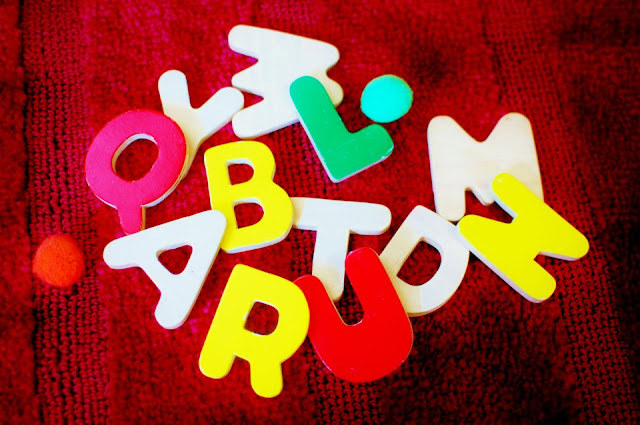 It is the same with words. What is the context in which the words are being expressed? What are the feelings behind the words? What is the intention of those expressing the words? How are they interpreted by the other child, or children? These are just some of the questions I ask in guiding myself and children through this maze called language and human interaction. 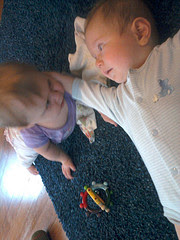 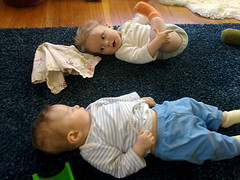 We help to clarify meaning when hearing a child yells “NO”--“J, I hear you say No. I wonder what you are trying to say?” We help to tie together expressed feelings, to advocate for all--”You push S because you are upset that he took your train. You really want him to give you that train back!” We talk a lot, adults and children, about what we say to and about each other, about what hurts our feelings or makes us laugh.


Recently, some Tumbleweeders have voiced concerns about teasing. Sometimes, it comes in the form of “She said I am not invited to her birthday party!” or “He said I am not drawing a truck!” Other times, it comes in the form of name-calling. Everyone has the right to not be called whatever it is they do not want to be called, whether it is poopy head or duck face. Children have the right to test out those “hidden in the sand boundaries” with each other and the teachers. How else will they truly understand their own feelings and the feelings of others if they do not try it out?

I know some of you have felt more than a little uneasy when your child said to me, “Good- bye, stupid Hsiao-Ling!” But there is no need to be alarmed. First off, if I do not want to be called “Stupid Hsiao-Ling” by a child, I will tell him, “I don’t want to be called stupid,” and he will not call me that anymore. I know what you are thinking. “If I let my child call you a name, then he is going to call grandma, or a teacher, or a neighbor, or the babysitter, or me a name.” You are right. He might. And if he does, it is an opportunity to say out loud to your child and the “victim”-- “I don’t know if Mrs. Harrison is okay with being called a butthead. Are you, Mrs. Harrison? She said no, she is not okay with you calling her a butthead.” Doing this firmly, clearly, and empathetically, even with the very young children, it is an opportunity to model civil dialogue. This will help children to see that each person and each situation is different. When we tell children, “Don’t say stupid, it’s not a nice word” as a blanket, from-this-day-forward rule, they simply can not apply it to every situation that will surely arise. Take each interaction separately, considering who is involved.

“My old college buddy says he doesn’t want to be called a dorkface. He had enough of that at grad school.”

“The bank teller says she doesn’t want to be called a wiener face.”

“I am OK with you calling me a butthead, but not a buttass. It’s just redundant, you know.” 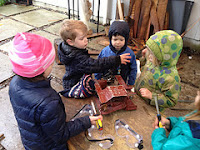 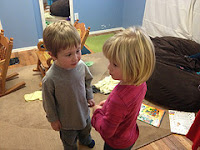 None of us wants our children to exclude or reject other children, or to be excluded or rejected by other children. But we must realize they are learning about lots of social rules that they had no part in creating. Children will exclude and reject each other and be excluded and rejected. What we strive for at Tumbleweed is to provide children with real opportunities for real discussions, with real emotions, and real resolutions. Even with more serious conflicts such as abusive language or physical aggression, the first thing we do at Tumbleweed is to bring the participants together and allow them to check-in and express verbally. 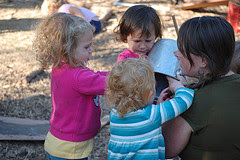 Me: “He hit you in the face? That must hurt. Do you want me to bring J over so you can talk to him?

Me: “J, I wonder what you are trying to say when you call him stupid poopy head?”

Me: “One thing I know about S is if you tell him what you need, he will listen carefully.”

Me: “Oh, perfect! Now he knows you don’t want to be chased. Thanks for letting us know, J!”

Some of you may wonder if I should have punished (i.e., teaching a lesson) the child who hit, or the one who called another “stupid poopy head.” But doesn’t this scenario seem more educative and productive than a trip for “Time-out” or some kind of punishment? How much life learning they miss when I send them away from each other to teach them how to be with each other? 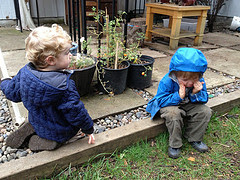 Their strong language could be misinterpreted as a lack of guidance or (moral) value in the education of our children. However, words only have power if they are given power. If we wince or reprimand children for using certain words, those words become inflated tools of power. Threats are different. Those kind of words are linked to actions. But the word “poop” or even “shit” is as powerful or powerless as our reaction allows it to be.


We can create an environment where children know they can speak openly and honestly with each other and with us even if honesty is angry or confused. We can help them to see that these are natural occurrences in human interaction. The sooner we allow them to work their verbal, cognitive, and social muscles, the stronger they will be as life’s inevitable disagreement arise. 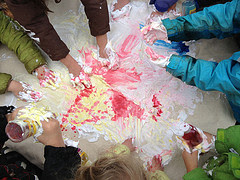 Email ThisBlogThis!Share to TwitterShare to FacebookShare to Pinterest
Labels: Communication, Emotions, Language, Manners, Observations, Preschool, Problem Solving, Respect, Social Interactions, The Words We Use, The Work We do