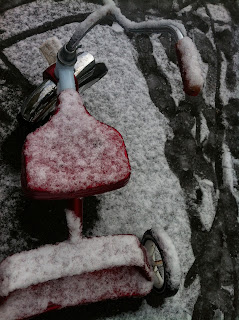 It's extremely rare that we see snow in the PNW before Christmas. This year happened to be one of those rare years! We opened up our curtains as open as they would go and watched the big snow flakes fall outside as we hurried through snack that morning. It can take a while to get four toddlers into snow gear and out the door as it's a pretty big transition, but we made it! The infants had headed out before their snack and gotten to glimpse the snow falling first hand but heading out after we had eaten gave us a little more leisure time to explore this white powder. The snow had stopped by the time we were out, but there was still plenty on the ground to investigate.


Much of our time outside consisted of walking around the snow-covered yard and simply observing. The children were very interested in looking at how things were different than when the snow wasn't there. IS pointed to the bike seat where he would normally find a fresh pool of water from the rain. LC was not at all interested in walking and immediately wanted to be held where she could observe the snow without actually touching it. 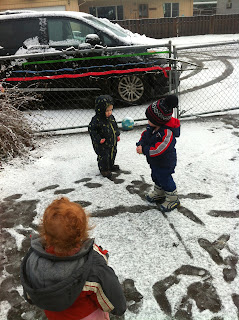 QM and VR were the most interested in actually touching the snow. They walked around to get their bearings for a bit then began to reach out and touch the snow. We were without mittens but this did not stop the two of them in the least. After a little bit of touching snow on leaves and on the grass, they decided it was time to deconstruct the snowman Amy and Willa had built that morning. VR found a stick and began to poke at the snowman until its head fell off. QM kicked it to break the head into smaller pieces while VR continued to use the stick to break apart the body. After it was declared completely deconstructed they continued to explore the snowy yard. 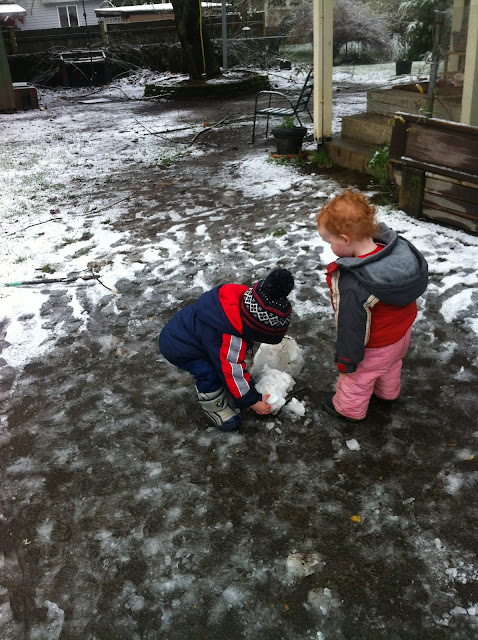 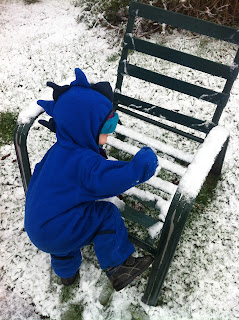 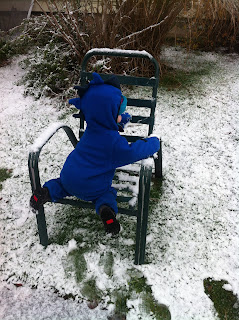 After watching IS, QM, and VR for a while LC decided that it must not be that bad to play in the snow after all. She wiggled to let me know she wanted down from my arms. I turned my head to focus on her and asked "Are you ready to get down?" She nodded emphatically and I helped her to the ground. She immediately went for the green lawn chair that was covered in snow. Climbing is one of LC's favorite past times and the slickness of the snow mixed with the already challenging to climb lawn chair was a perfect natural provocation for her. After a great deal of hard work, LC's determination paid off and she made it up into the chair. She leaned back somewhat awkwardly and basked in her success before sitting upright and reaching to be picked up again. 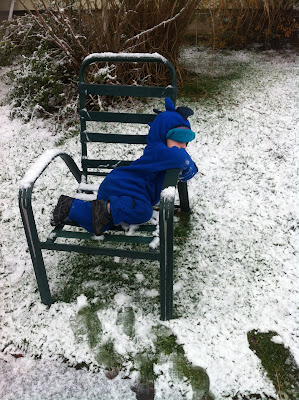 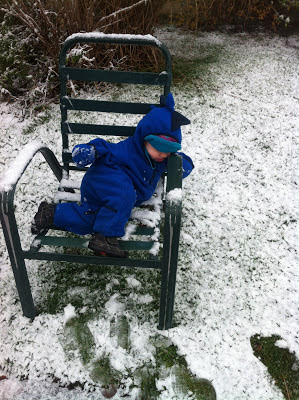 Though the snow was a wonderful new medium for us to explore, it was also very cold and we headed in shortly after LC's chair climbing. We all look forward to the next time the snow comes to visit us, though! 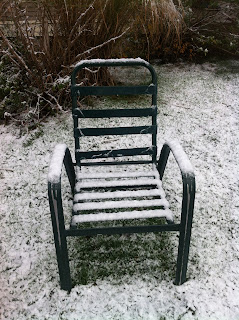