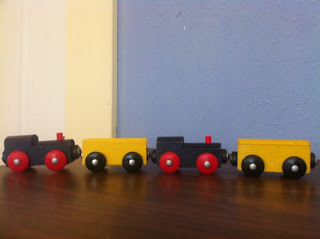 Recently Cohort 5 has been interested in movement. Vehicles of any sort have been a chief focus in our movement explorations.LC is especially interested in the wheels of cars. She carefully holds a car in one hand while using her free hand to move the wheel around and around. Occasionally she pauses to lift the car up and show it to me, sharing her knowledge that the wheel turns as she moves it. Meanwhile, VR and HH love to explore how vehicles move when they roll them down slopes such as the wooden slide outside or the small ramp in our classroom. 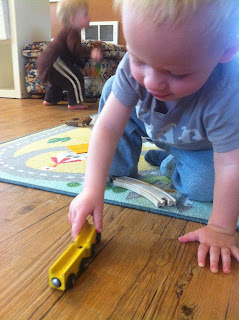 IS loves to crawl alongside a car or train as he pushes them about our classroom. He's very focused on getting from one side of the room to the other as he moves the car along. 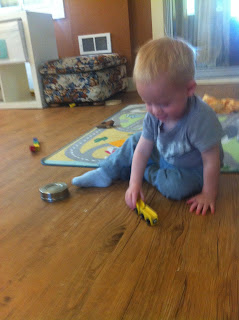 To support this interest we have begun making some changes in our classroom. First we moved all of our furniture around to give the room a fresh look and a large space for using cars. The PSers were kind enough to lend us their car rug to put into this space. This has inspired HH to drive cars along roads and park them in various places such as the mountains or football field. VR has been very keen on building train tracks on top of the rug as well. 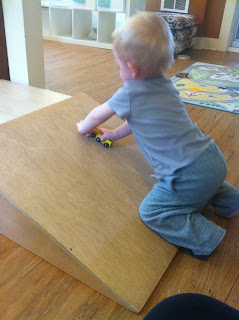 The ramp moved to the center of our room and became a major focal point. It is regularly used for sliding cars and other small toys down, including our animals which now live close to the ramp itself. Having it in the center of the room has led to all four children having an interest in utilizing it during their focused play with vehicles rather than just VR and HH.

We have also been using the silks during the afternoon. There has been a great interest in how the silks fly through the air and move with us as our bodies move. As we move forward, we will be implementing much more to support our continued exploration of cars and movement. A trip to the library will bring in books about travel, vehicles, and movement. 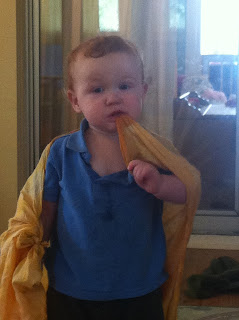