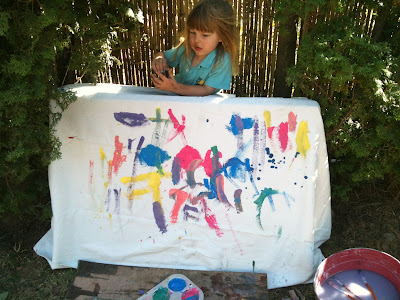 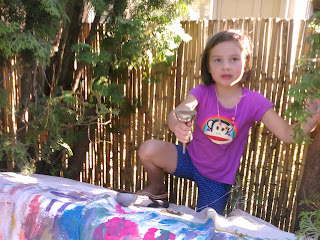 Over the last few weeks, one theme of play has been revolving around this table that we placed outside.  It's somewhat broken, so we propped it up between two trees, creating a cozy spot behind.  We have used the wooden surface as a canvas for many layers of paint or a place to drape a fresh canvas for even more color mixing opportunities.  It has been a hiding place, a fort, a house and now an ice cream shop.  Almost constantly outside someone is on the back side of the table announcing, "Who wants some ice cream?!?" 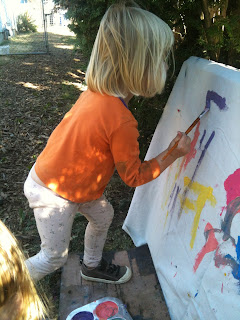 Because it is so frequently used, there is often too many children behind the table.  There was often many struggles over space and who should be where and even injuries resulting from the table falling apart from the heavy usage.  It became apparent that we needed something better, more sturdy and easier for us to use.

Our first step was to spend some time thinking about not just the design of our new structure, but our plan.  We decided the old table needed to go, but where?
"Let's break it!" suggested K.
"Yeah! It's old and dusty."  TLC commented. 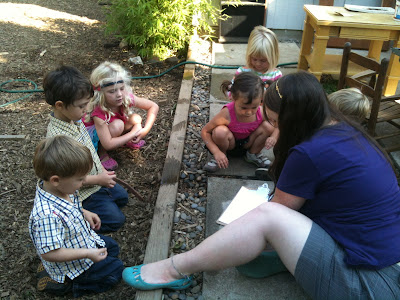 "We could make something that could be an Ice Cream Stand and then something else, like a rocket ship." suggested SC
"Or a race car!" M added.
"Or an ambluence." said SJC.
"And maybe just another house," said W and J.
Now I was getting really excited.  We made a list of what our plan was: 1. Break the table; 2. Use the pieces to build a new structure; 3. Throw any extra parts away. 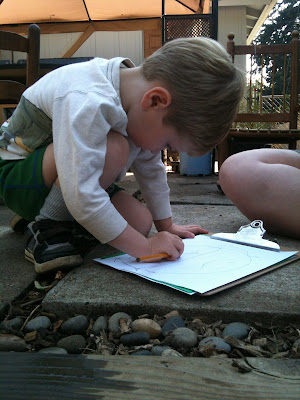 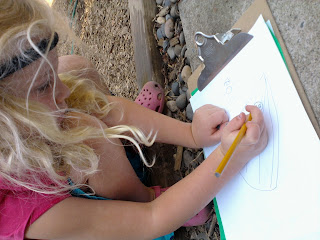 Everyone took turns drawing their ideas.  Many people stuck around and watched as the one clipboard and pencil circulated.  Everyone who was interested drew their designs and talked about the parts they were drawing.
There was a sense of satisfaction as our design session ended.  Next: Demolition!

Posted by Tumbleweed Teachers at 7:07 AM