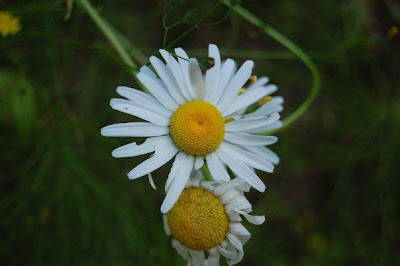 This afternoon all of us preschoolers walked back to the Infant House, fondly called the old school.  This is a great time for us as we return to our roots and there was much excitement around visiting the babies who we had not seen in a few weeks.
Upon arrival many of the children congregated on the front lawn where all four babies were playing.  The air was full of joy, but also some nervous crying from the babies who were suddenly swamped with the new arrivals.  I sat down and talked about noticing the babies reactions and how it can help when we give them space and move slowly. 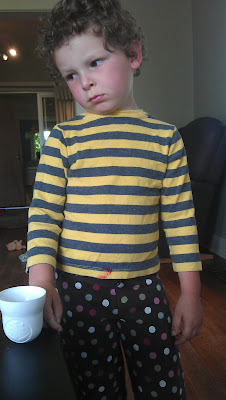 Soon everyone moved on to the next thing: running through the yard, collecting snap peas and raspberries, returning to their favorite rope swing.  I remained on the grass, reconnecting with the babies I used to see so frequently.  One of the almost 4 year olds came running past as I was holding one of the older infants.  I'm not certain that he had ever seen me holding a baby, so he seemed drawn to me.  He got very close and the infant was thrilled.  He carefully wrapped an arm around her back to give  her a careful side hug as we all found some peace on this hot day.
One thing to know about this 4 year old, is his body often has the need for big movement.  He also carries a strong emotional awareness and intelligence about himself.  This morning there was a moment where his feelings rose and he felt very strongly.  We were sitting together and I asked him "I wonder what you're trying to say?" as he got frustrated while we did some counting on the calendar.
"I'm very hungry!  I'm very hungry and very tired!"  He cried more as he told me this. 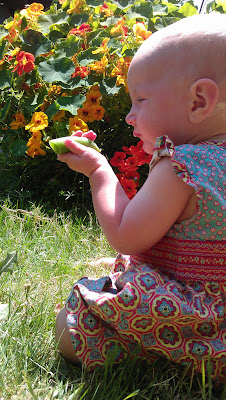 "Oh that is hard.  It's hard to be patient when you're tired and hungry.  We will be having snack very soon.  Is there anything I can do to help you feel better right now?"  I wanted to reach out for a hug, but knew that his body needed space.
"Just space." and he continued to cry.  He pulled his feet up onto his pillow and remained with the group of children.  We began adding more numbers to our calendar and counting.  He continued crying.  When someone noticed or tried to help, I reminded everyone about what he had said about needing space.  He continued to join our group.  The day flowed onward.
Today, he has an interest in the babies.  He moves back and forth from visiting them and exploring the yard, slowly spending more and more time int he front.  He approaches one baby and gets very close.  She immediately begins to cry.  He doesn't move, but instead moves in to give her a hug.  I had just helped this baby become settled and pointed out something I noticed to the older child. 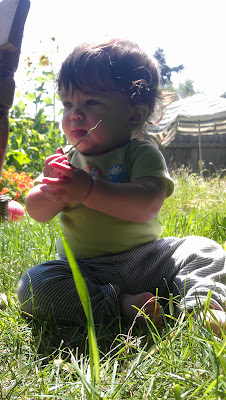 "Oh man, I hear her crying.  Hugging didn't work.  Earlier, I noticed that it helped this baby feel better when she had space.  That reminds me of you!  Remember this morning, I really wanted to give you a hug when you were crying, but you told me you needed space.  I think she is very much like you!"  His eye grew wide and he slowly moved backward, like a bubble was expanding.  There was a realization that had just happened that transcended the moment.  This 4 year old was able to see who the infant was and what she needed to feel safe and happy, but he also found something about himself, outside of himself.

Soon, with his new awareness, he was meowing at the infant and she would crack a huge smile.  I could see a sense of realization in her as well.  There was something so satisfying  in this moment for both of them, and for the rest of the afternoon, he ran to her when he heard a cry and was the only one who could coax a smile.  It extended our time together outside and enhanced their understanding of human nature.
Posted by Briana at 9:36 PM