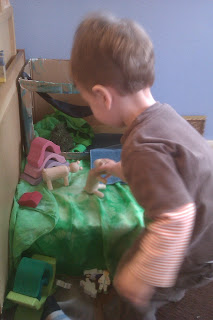 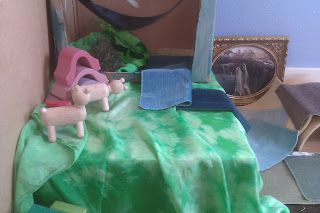 This morning as I was working on setting up a provocation in our elephant area, I realized that while I was setting up the area I was also really playing!  I have always known that a big part of the reason I have the materials in my room is that they are things that I love and enjoy playing with, just as much as the children.  It's partially my love and joy in the objects that fill our space that infects their own curiosity and imagination. 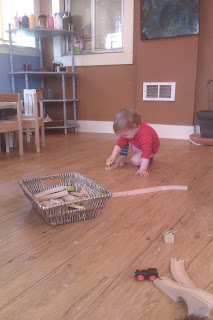 Once I realized that I was indeed playing, I took a moment to look around at what everyone else was doing.   We had reached a flow for our morning where everyone was in a different area of the classroom, focusing on what they were doing and seemingly oblivious of what each other was doing.  W was at the light table, playing a game of warming up a baby in a box.  T was very seriously building a train track.  SC was putting 'seat belts' on him and his baby and GH was alternating between 'eagle watching' and bouncing off of any soft surface. 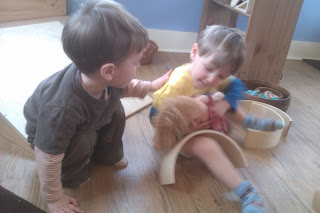 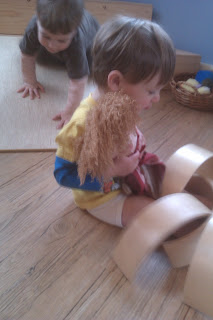 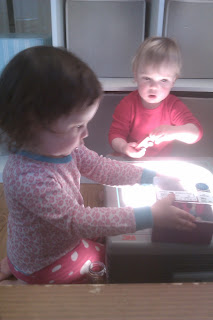 As soon as I started watching what the other were doing, they began doing the same thing.  T joined W at the projector and watched her before finding a fluid way of joining in what she was doing.  GH came over to SC and rubbed his back.  The play naturally shifted from focused individual activities, to joining together.  Some children moved on to another activity, while their focus play was taken over by another child.  Some worked together, finding a new avenue of play as the players changed. 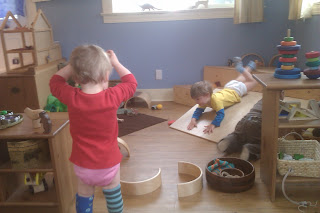 Soon, everyone was gathered around the stairs, taking turns sliding down the slide or watching.  There was this sense of contentment as everyone came together after working on their own.  They were very careful of each other's body and space as they each had their own roles. T enjoyed watching through a transparent block as SC perfected his superman slide.  GH was the cheerleader, jumping and laughing around the play.

It's morning like this that exemplify the benefits of free play.  There were not expectations of the children.  We could have been going outside, but seeing this moment where everyone was focused in their play it was impossible to break it.   We respected each other's need subconsciously, but creating a space where our needs are met.  It felt as if this allowance of space and time and freedom spread once it was started and when it was time move on, our play grew together in a very satisfying and natural way.