If you have visited the preschool house lately, you may have noticed some magical transformations in the backyard. A covered area, a play structure and a climbing structure are now permanent fixtures in our outdoor play. However, the play structure has undergone several stages over the past few weeks. We now have a floor and a roof but it began as a few posts. However, this did not deter the preschoolers from incorporating the structure in their imaginative play through each of its transformations. The preschoolers had been very focused on playing Rudolph when the posts were first introduced. Thus, with help from a piece of yarn, the four posts became a sleigh.

The next week, a few floorboards and a roof were added. Bee and I attached a ladder on one side. The PSers mostly used the ladder as a swing and demonstrated more interest in creating their own paths for climbing up the structure. My initial reaction was to make the climbing structure off limits until it was finished but I could sense the PSers' enthusiasm for climbing and decided to step back and let them explore. I made sure I was close by but stated that I wasn't available to lift anyone up and that if they needed help down it showed me that their bodies weren't ready to be on top of the play structure. I hoped this allowed them to figure it our on their own and develop new coordination. The project began to gain momentum as each PSer navigated what felt safe in their climbing attempts. IO and KO initially used the ladder to climb the structure and when T also wanted to find a way up, they stood by and helped instruct. IO held the ladder steady while T climbed. 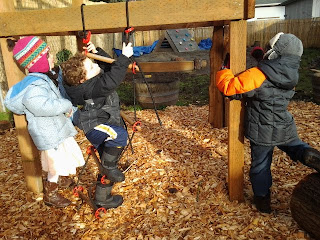 When this did not prove successful, the PSers banded together to figure it out! First T tried to use some stacked buckets while K coached, " one foot at a time." 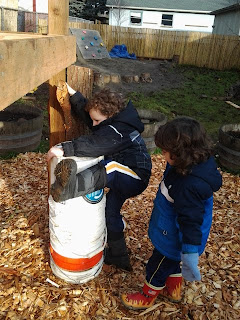 Alas, the three stacked buckets were too tall. T began to feel frustrated but G soon had an idea. He rushed off and returned with a green crate, "try this here!" G then set the crate next to the buckets to create a stair system. 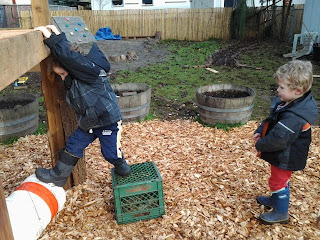 G then stood back and observed how the setup worked. When the buckets fell over he helped T prop them up again. 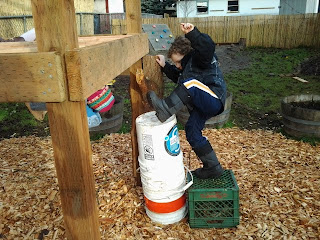 
Once the PSers had established a system for climbing up the structure, rescue play commenced. The play structure was "on fire". KO, T, G, and K adopted the firefighter roles as IR and IO climbed on top of the structure. "Here 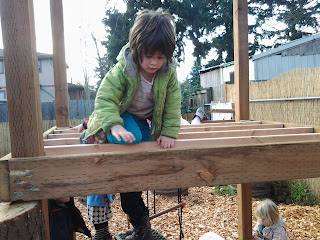 KO offered a stick to IR. "Here! Grab this. It's a ladder." IR tried to hold the stick with one hand as she lowered herself from the structure but eventually decided that two hands were necessary as she stepped onto the chair below her. 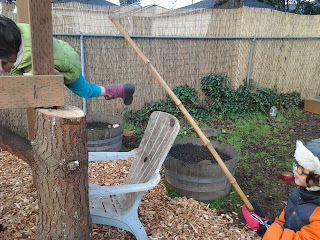 KO also brought over a "fire truck" for IR to lower herself into. T decided to use the fire truck as a step in the stair system the PSers had invented. 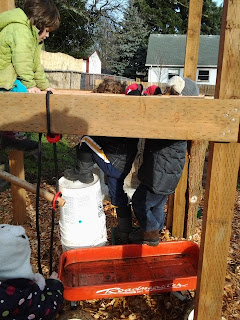 I noticed a few themes throughout this climbing exploration. The children not only practiced fine motor skills as the maneuvered the structure, they also practiced mathematical skills and problem-solving through their development of climbing systems. How many buckets should they stack? How many levels were required to reach the stacked buckets?

Perhaps what interested me most was the depth of teamwork involved in this process. Each present PSers was focused and available to his/her peers. Everyone particularly banded around T as he struggled to discover a route to the top. "You did it!" IO cried as T lifted himself up. T would often smile and say, "Thanks G" or "Thanks K" as they offered him help. The PSers formed a community of helpers that seemed to increase the level of accomplishment and subsequent joy from that accomplishment.

What I reaffirmed in this observation was a belief in basic trust. If I had intervened and made the structure off limits, the PSers could not have made these discoveries. Thus, my role was minimal: step back and make myself available only in situations where safety was at stake. This provided me with some insight. When given the opportunity, the PSers seemed well equipped to establish boundaries. "I don't feel safe!" SW stated as he climbed the chair and it wobbled. He then stepped down and moved on to a different area. Many children echoed this statement in their climbing and were able to navigate what did and didn't work for them.

In the end, I was impressed by the level of communication, teamwork and problem-solving skills demonstrated by the PSers and I left the outdoor play with a renewed belief: basic trust. They can do it. Sometimes I just have to remind myself to relax and let them play!
Posted by Elissa at 11:51 AM