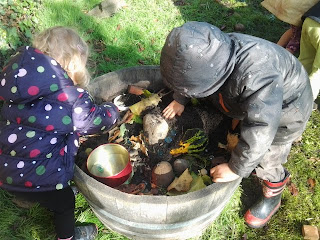 Along with TPH's castle fascination, the preschoolers have been very interested in fairy tales. We often read a collection of classic fairy tales Bee found at the library and, when outside, the preschoolers construct "fairy homes". This theme has been present since I first arrived but continues to surface and develop. 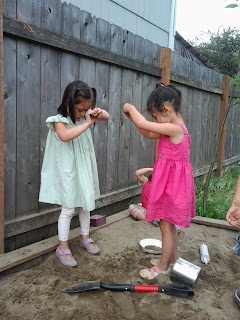 In this photo, months ago, IO and EB "free" fairies from their homes. This game continued for a few days and consisted of digging for rocks or clusters of mud in the sand. They would then crumble the sand to let the fairies fly away. What captivated me about this moment was how the preschoolers created such inventive stories with the objects in their environment. A cluster of dirt transformed into an entire world. Moreover, many children participated in this play which created a space for imaginative collaboration. The preschoolers worked together to create an alternate realm where they all saw fairies, built their homes, created small cakes and shared stories about the fairy world they had created.

The fairy home theme has only continued. It began in the sandbox. "What are you working on?" I asked IR and EB one day. "Fairy homes!" EB shouted back. I noticed that the fairy home play had expanded to include elaborate decorations. 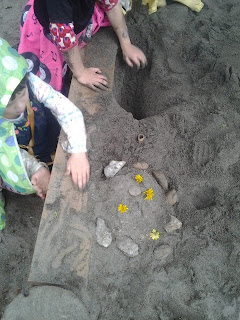 One of the objects we introduced for outdoor play were collections of colorful stones. These quickly became decorations for a fairy home in one of our circular planters. Thus, the game continued to grow as it moved out of the sandbox and the focus on decoration intensified. When I asked IR why they placed the jewels in a particular pattern she replied, "we have to make the fairies want to live here." Throughout the day, almost every child had a chance to arrange and rearrange the stones and objects in the fairy home. 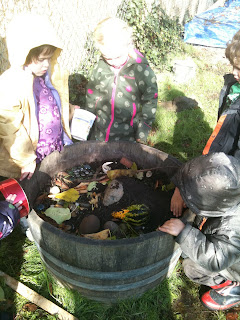 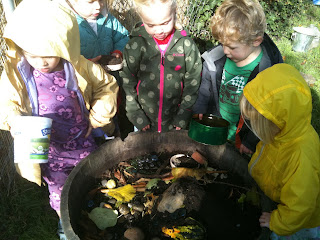 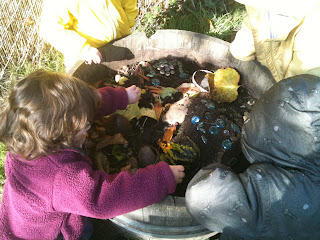 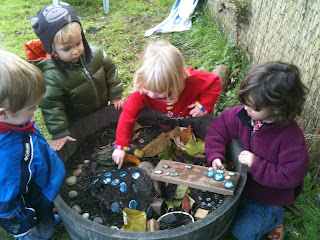 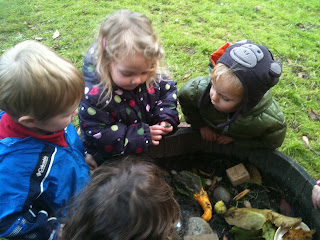 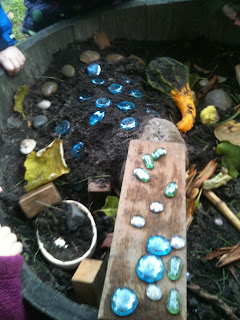 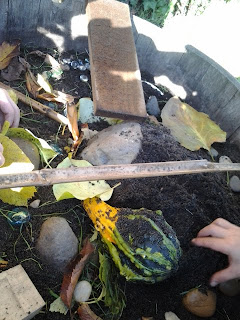 KO builds a "bridge" for the fairies.


Other additions included boards for "bridges", leaves, a squash and rocks. After the PSers were satisfied with their decorations, the game developed to include monsters. They began to cover the planters with boards and rocks. When Bee asked what they were working on, she observed this conversation. 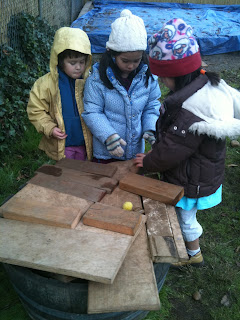 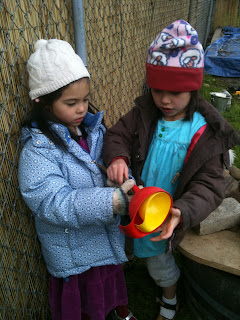 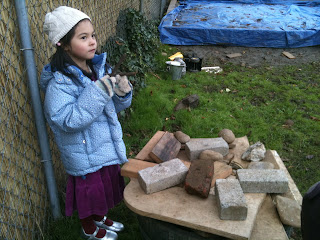 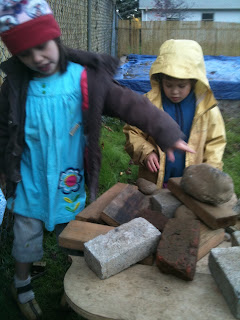 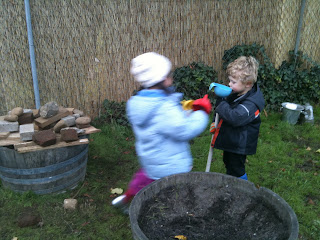 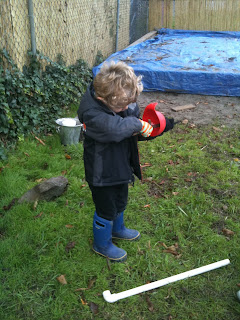 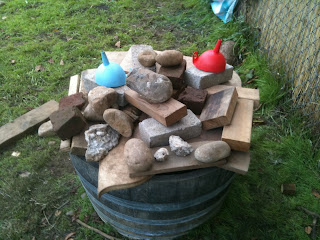 I notice a few interesting themes working in this conversation. I am fascinated by the group storytelling that occurs with the PSers imaginative fairy play. The creation of a fairy world, and the plot developments in our play (like monsters) are a group effort. Moreover, the PSers imaginations seem to stretch even further and the play lasts longer when a community of imaginations are at work. This focus on group play links to the Everybody or Nobody rule that we have been processing over the past month. I noticed that, in this conversation, G approached EB, IR, and IO and asked for a job. This has become a common way for PSers to enter imaginative play, which does not only allow them to participate in the storytelling and play acting that unfolds, but also facilitates development of joining skills. The language of "jobs" does not only circumvent exclusion, it actually helps the PSers expand their play. Do they need a guard? Someone to fetch water for a river? I have also noticed that the jobs the PSers assign aren't often helping jobs, but are roles to act out: a prince, a guard or a monster.

Thus, I am enthusiastic to see how our focus on fairies can develop. Perhaps a theater provocation in which the PSers create characters and roles would help us explore the acting, imaginative aspect of our play. Amy also mentioned a Fairy Festival which would be a fun way to expand on the decoration and pattern aspects of the fairy homes. I will keep you updated!
Posted by Elissa at 1:11 PM