Throughout our first week at TPH, I began to notice the preschoolers and toddlers finding and making all different kinds of patterns from simple to elaborate, with stories and without. This is what I observed:

Elissa placed the small, wooden, multi-colored shapes on one of the tables first thing in the morning. Once TS sat down at the table all of the shapes were mixed up in the middle.
Here is what happened next: 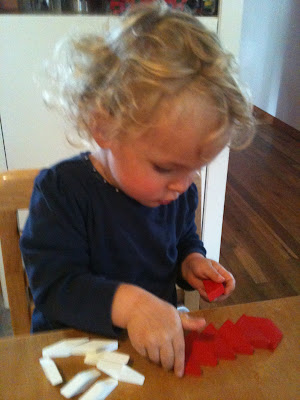 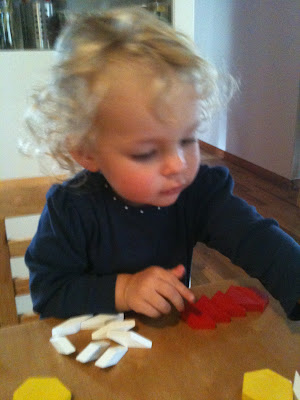 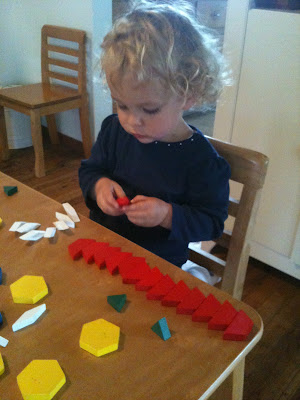 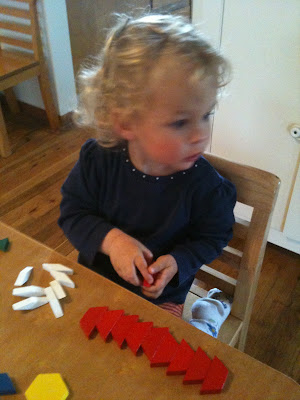 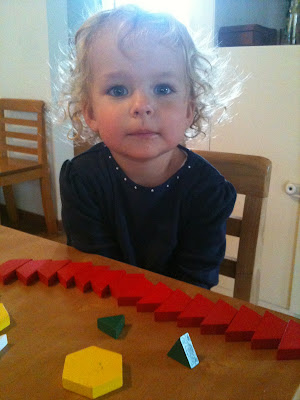 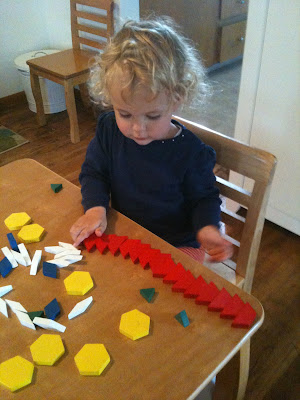 TS made a pattern using all of the red trapezoid blocks that she could find. This pattern took the form of a snake for her.

The following morning, IR became very focused in the block area. This is the result: 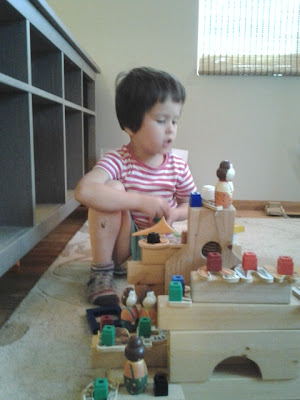 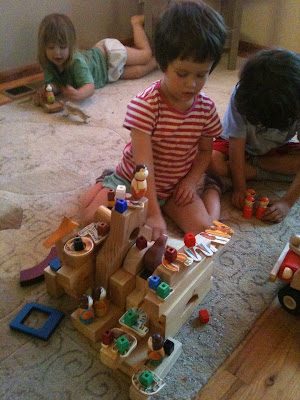 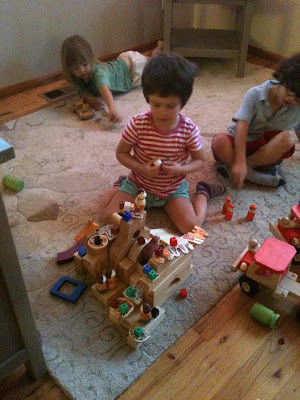 IR used blocks, a wooden alphabet puzzle, a few wooden animals, and small plastic parts to make an elaborate structure. IR explained that this was a “zoo.”

Through the use of many different objects, IR was able to create a multi-colored, multi-level structure, where each group of items (E.g., the alphabet puzzle pieces) created a unique pattern that changed the entire structure.

The following day, the robot puzzle became a new way to explore how patterns can change, take the form of something else, and then change back into their original form.

In the morning, I discovered JH taking the pieces out of the puzzle base. 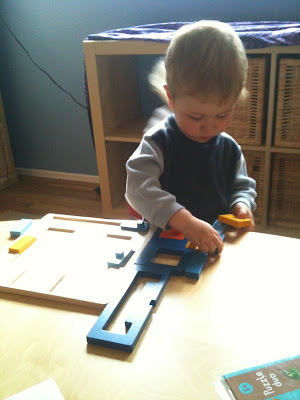 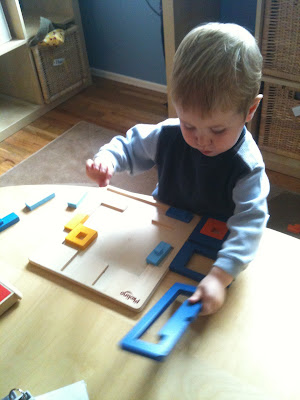 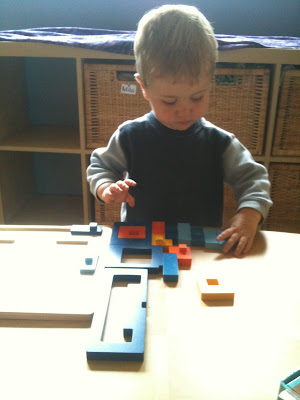 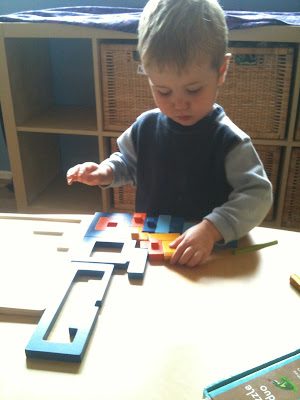 After JH carefully placed the puzzle pieces next to the base, he proceeded to put each piece back into the base, in their original spots. He began telling Melinda and me about this. He pointed at one piece and said, “It's a mountain.” He then placed a yellow piece on the board and said, “a bridge.” After about a minute of placing the rest of the small pieces in, he pointed at the small blue rectangular pieces and exclaimed, “boats!” 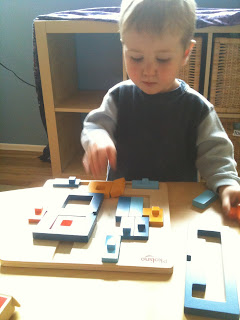 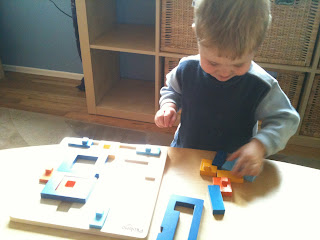 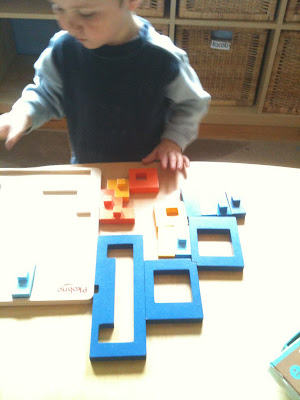 JH then took the pieces back off of the board and created a new pattern, aligning each piece carefully in the way he wanted. 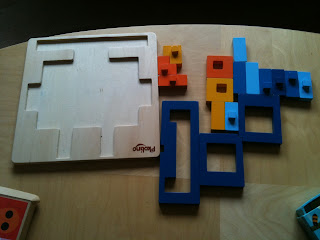 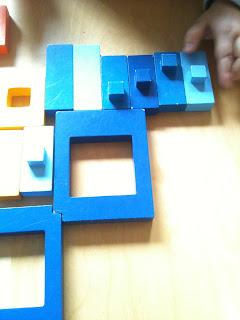 Later in the day, KC found the robot puzzle and like JH, took the pieces out of the puzzle base, but created a different pattern and theme with the pieces. 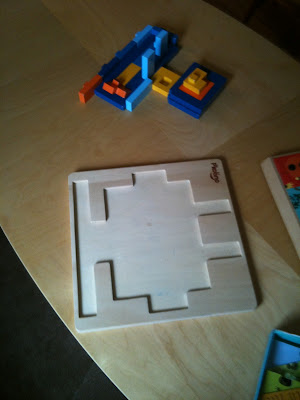 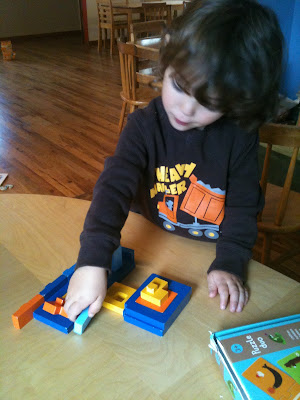 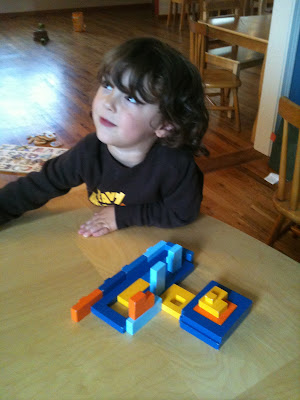 KC told Melinda and me about his structure. He said, “it's a rocket.” Melinda asked, “where is your rocket going?” KC replied, “to Mercury!” I left for a minute, then came back to find KC adding more pieces to his structure from a different puzzle. 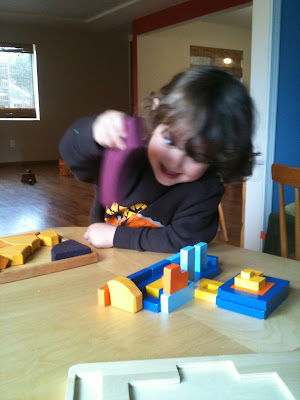 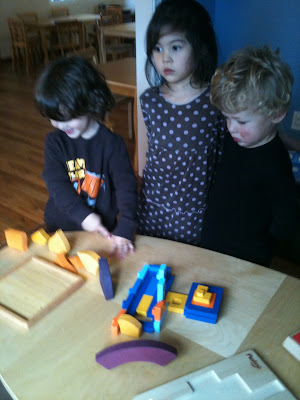 IO and G came to observe what KC was doing also. He began telling us about the newly added pieces. He pointed at the pieces and said, “this is a line of moons,” and pointing at a block in the center said, “and this is a satellite.” He then pointed at the orange piece closest to the puzzle base and said, “this is Mercury.” I left and came back again and KC had added memory game pieces to his structure. He exclaimed, “this is the launch pad!” 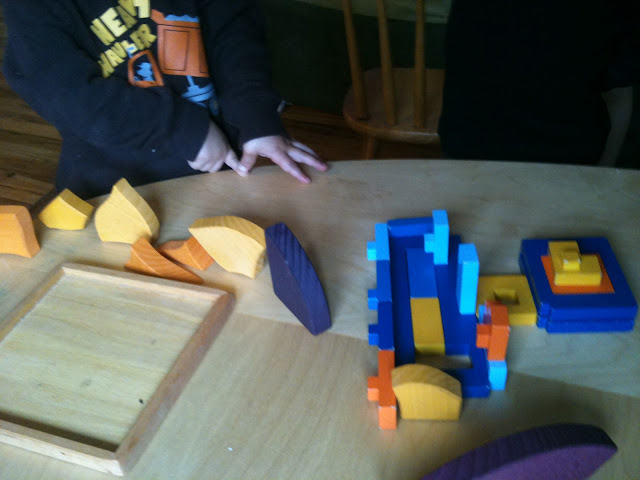 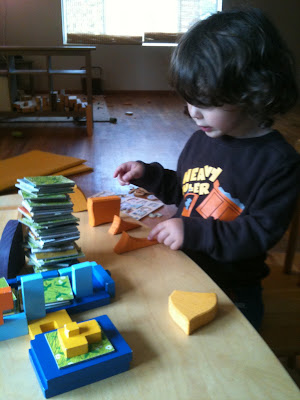 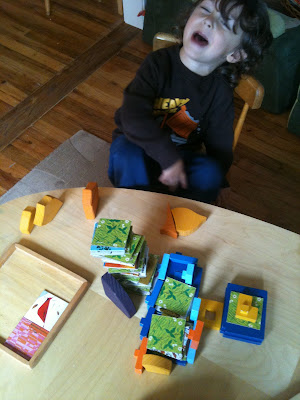 KC had not only created a new pattern with one puzzle, but he constantly created new patterns by adding to his structure, by rearranging pieces, and by continually developing his story with each new puzzle piece addition! KC also gained the notice of IO and G, who were interested in the structure he had created, and what the pieces would transform into next!

The next day, I noticed SM lying on his stomach on the ground, exploring the matching game. 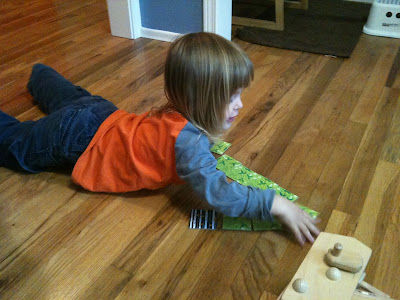 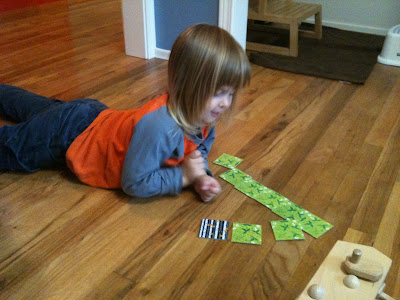 SM had turned the pieces over, making an upside-down V with about 10 pieces. He chose to turn over one of the pictures at the end first. He then turned a picture over at the top and exclaimed, “noooo,” shaking his head as he turned the picture back over. He then tried another picture, comparing it to the original one he had flipped over. He did this for a short while and then scattered the pictures. He was playing the matching game! He had placed the game pieces in a pattern that worked for him to easily lay down near them and compare two pictures at a time.

Patterns can be found in everything we do. I have shared some of the patterns the preschoolers and toddlers make on a daily basis with the objects in the classroom. I also observed a different type of pattern that one of the preschoolers found. It wasn't with any object we have, but within a piece of music that Elissa played for the preschoolers one day. KO discovered a pattern in the music: